When did Littlefinger hold a knife to Ned Stark’s neck? When was he that brazen? Learn more about that scene below.

Warning: This post has major spoilers for Game of Thrones Season 7 Episode 7.

Here’s the scene that Bran talked about in the Season 7 finale:

Lord Stark was told that King Joffrey had requested Ned’s presence. This was when Ned first found out that Robert Baratheon had died. On his way, he encountered Varys and Littlefinger.

Littlefinger and Varys followed Stark on his way to the royal chamber.

Joffrey requested oaths of fealty from Ned Stark and the others in the room. Ned handed a letter to be read in front of Joffrey. The letter had an unbroken seal and was from Robert Baratheon, saying that Ned was named protector of the realm, to rule as regent until the heir came of age. Cersei read the letter and then tore it up. “Is this meant to be your shield, Lord Stark? A piece of paper?” She disregarded the letter, saying they had a new king now.

She told Ned Stark to bend the knee and swear loyalty to Joffrey. Ned said that Joffrey had no claim to the throne. Cersei ordered that Ned be seized and Joffrey called out for everyone to be killed. It was a standoff.

Fighting broke out, and Littlefinger grabbed Ned and put a knife to his neck.

It was Littlefinger’s actions that led to Ned Stark’s death. 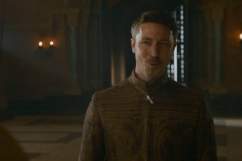 Read More
Game Of Thrones, HBO, TV
When did Littlefinger threaten Ned's life and betray him? See the video and recap here.