Tonight, HBO will air a new comedy special, The Wall, which will be broadcast live from the Kennedy Center in Washington DC.

In a recent interview with NPR’s Stacey Vanek Smith, Lopez spoke about the special and what fans can expect. Asked what a wall along the border means to him, he said: “I’m an American citizen, and I’ve seen a lot of change in this country. I’ve also seen my grandfather who had a green card, who was documented, work harder than I’ve ever seen anybody work in my life.”

Tonight marks Lopez’ fourth live solo stand-up special. The comedian is known for starring in his self-produced sitcom George Lopez and for exploring the intersection of a variety of socio-political topics. Lopez has received a number of awards for his work and contributions, including the 2003 Imagen Vision Award, the 2003 Latino Spirit Award for Excellence in Television and the National Hispanic Media Coalition Impact Award. In 2005, Lopez was also named one of the Top 25 Hispanics in America. 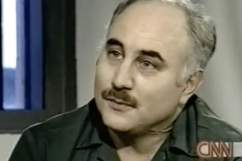