Glen Campbell has died. TMZ reports that the legendary country singer died in Nashville on Tuesday morning, after a long battle with Alzheimer’s Disease. He was 81.

Campbell is survived by his eight children and his wife Kimberly Woolen Campbell. A loud voice in the Alzheimer’s community, Woolen is scheduled to speak at The Alzheimer’s Alliance of Smith County luncheon in Tyler, Texas in November about the challenges faced by people living with the disease and their families.

Here’s what you need to know about Woolen her relationship with the beloved “Rhinestone Cowboy“:

Woolen met her future husband on a blind date. The matchmaker was Campbell’s banjo player Carl Jackson, who was courting a friend of Woolen’s at the time. Their date consisted of dinner at the Waldorf-Astoria with Campbell’s parents, according to People magazine, and a James Taylor concert. “I didn’t take it seriously,” Woolen recalled. “I thought it was just a date. But as soon as I met him, I knew there was something special about him.”

Campbell echoed the sentiment, saying “I liked her immediately. It was one of those things where you meet somebody and you just can’t get them out of your mind. So I called and said, ‘Let’s go out.’ ” At the time, Woolen was a featured dancer in two Radio City Music Hall shows and had appeared in a Jones Beach production of The Music Man.

She humorously recalled upon meeting Campbell, that she wasn’t very familiar with his music: “I had never followed his music,” she admits. Nevertheless, the couple were dating steadily by fall of 1981, and were married in October of the following year. The ceremony took place at the North Phoenix Baptist Church in Arizona. 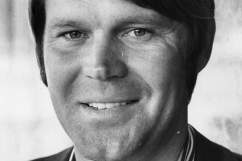 2. She Was Campbell’s Fourth Wife

Prior to meeting Woolen, Campbell had developed a reputation for being a ladies man. He married for the first time to Diane Kirk in 1955, whom he had gotten pregnant. He was 17, and Kirk was 15. After two children (one of which died as an infant, the other being Debby Campbell) their marriage fell apart, and they divorced in 1959.

Campbell went on to marry beautician Billie Jean Nunley that same year, who gave birth to Kelli, Travis, and Kane Campbell. According to People magazine, however, Campbell grew tiresome of Nunley’s expensive lifestyle, and felt that she had become “an absentee mother” to his children. They divorced in 1975, at the peak of Campbell’s popularity.

Campbell’s marriage to Sarah Berg in 1976 lasted only four years, during which time they welcomed another child, Dillon Ian Campbell. Berg claimed that the country singer was “running around with other women.”

Campbell was also involved with country singer Tanya Tucker, during which time he was quoted as saying “I’m dating one of the finest female talents that God lets draw breath.” Things heated up between the couple after he divorced Berg in 1980, but by the following year, the relationship turned volatile, and the singer called things off when he met Woolen. 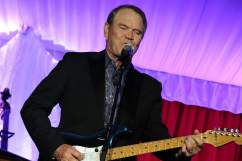 3. She & Campbell Have 3 Children Together, All of Whom Have Performed Onstage

Woolen and Campbell gave birth to three children during their marriage: Cal Campbell, born 1983, Shannon Campbell, born 1985, and Ashley Campbell, born 1986. Each of them have followed in their father’s musical footsteps, to the point where they’ve performed as part of his touring band at points in their life. In the video above, they discuss how important it is to them to get the chance to perform.

Cal penned a touching letter to his father when he was diagnosed with Alzheimer’s, writing “It’s easy to remember and rationalize that the lack of giving isn’t out of anger or spite, but that he’s just gone. Alzheimer’s has robbed both him and me of these little moments that make life so wonderful. It’s easy to remember this, but very hard to accept.” Read the full letter here.

After Campbell’s passing, Ashley posted a photo of them holding hands on Twitter. It was captioned “I owe him everything I am. He will be remembered so well and with so much love.”

Heartbroken. I owe him everything I am, and everything I ever will be. He will be remembered so well and with so much love. pic.twitter.com/1Z8mm8Jzth 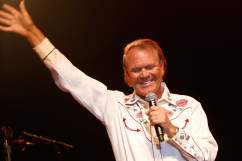 4. She Regularly Blogged About Campbell’s Battle with Alzheimer’s

Campbell was diagnosed with Alzheimer’s Disease in 2011. Alzheimer’s is defined as “A progressive disease that destroys memory and other important mental functions.” As a result, Campbell was forced to retire from live performance. Woolen penned an essay on the Alzheimer’s support site Care Living titled “The King of Campbellot.” In the essay, she discusses the emotional toll that the disease takes on a family, and a marriage.

The strange behaviour started making sense after we got the diagnosis of Alzheimer’s. Our roles were changing. In addition to being his wife, I would gradually become his mother, his nurse, his conservator, the leader of our family, and his protector. Saying, “Okay, Mommy” was Glen’s lighthearted and possibly even subconscious way of placing himself into the hands he trusted most.

Glen did not go through retrogenesis (mentally regressing from old age to infancy) as some people with Alzheimer’s do, but he did become childlike in many ways. I made sure he was never left alone and took measures to safeguard the house by locking up the medicines and cleaning products that might be harmful if ingested, removing the key to turn on the gas fireplace, keeping sharp objects out of sight, and fencing the property to make sure he couldn’t wander away.

Since 2011, Woolen has posted countless essays on her marriage, and how she supported Campbell as his condition worsened. Read them here. 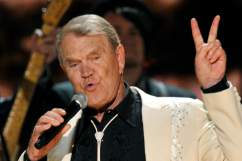 5. She Fought With 2 of Campbell’s Oldest Children Over His Well-Being in 2015

As Campbell’s condition worsened, Woolen made the decision to move him to a full-time care facility in Florida in 2014. The decision sparked heated debate among fans and supporters.

Additionally, Debby Campbell-Cloyd and Travis Campbell claim that Woolen was keeping their father “secluded from the rest of the family” which has been “prohibited from participating in his care and/or treatment,” according to Fox News.

She decided to address these criticisms in a statement released to the Associated Press.

“The doctors and my team know what care he needs, and they were an integral part of this family decision,” Woolen wrote. “Our children, all of Glen’s brothers and sisters and extended family support me as well as his daughter Kelli. It is very hurtful to have people who are very far removed from our situation to be scrutinizing and judging our private family decision.”