It’s been three years since Swift released her last album, 1989, and now she begins the thrilling rollout for her newest release, Reputation.

Swift announced the news on her Instagram account Wednesday afternoon, posting not only the album cover and its release date (November 10th) but that her first single will come out Thursday night.

But where can you stream and listen to it?

Swift’s single “Look What You Made Me Do” is currently available on iTunes. You can purchase the song by clicking here, along with a pre-order link to the full Reputation album. For those who would just like to give the song a listen, check out the lyric video below.

Prior to its release, many fans believed the song would be called “Timeless”. The theory took shape even before Swift announced the single’s release date, and stems from the fact that the mysterious website www.timeless.com appeared on Monday.

If searched, it takes you to a black homepage with white cursive text that reads “Timeless” and “Coming Soon.” It is unclear how this will play into Swift’s album rollout.

As for the lyrical content of the song, titled “Look What You Made Me Do” Swift appears to be alluding to make good on her new image, with lyrics like “Sorry, the old Taylor can’t come to the phone right now” and “But I got smarter, I got harder in the nick of time / Honey, I rose up from the dead, I do it all the time / I’ve got a list of names and yours is in red underlined / I check it once, then I check it twice.” Read the full lyrics here.

Some fans have also pointed out that Katy Perry previously announced that she would release the music video for her single “Swish Swish” today.

Granted, it may just be a coincidence, but knowing the complicated history between the two pop stars, as well as Swift’s propensity for releasing things on the same day as Perry, it looks like yet another power move from the “Shake It Off” singer.

Why is no-one talking about how #TaylorSwift is dropping single same day as #katyperry new music video? #tayallday #teamtaylor #katywho

Either way, fans are extremely excited about the new single, and the reactions on Twitter range from sheer bliss to shock and in some cases, an aggressive showcase of support for Swift.

Check out some of the most notable reactions below.

When your Taylor Swift playlist transitions from "Shake It Off" to "Look What You Made Me Do." pic.twitter.com/Fmj7k85lIM

New @taylorswift13 song or real-life episode of HIMYM? Cuz she just transformed into Robin Daggers and we all died too. #LookWhatYouMadeMeDo pic.twitter.com/xjAC9uyWGv

Taylor Swift came back after 3 years with a dark pop song that ended all of her haters in just 3 minutes and 32 seconds#TaylorSwiftIsBack pic.twitter.com/VFmQeHNdEf 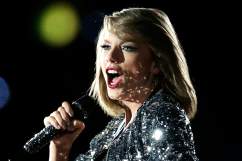