HBO Rhaegar Targaryen left the Kingsguard at the Tower of Joy to guard Lyanna.

Rhaegar Targaryen is Daenery’s older brother, but he was never seen alive on Game of Thrones. He was older than Viserys and much kinder, unlike his cold-hearted younger brother.

That’s what makes his death so tragic. Out of so many Targaryen men, Rhaegar was kind-hearted and would have made a good king. He had the same good heart that his younger sister Dany has.

But he died tragically young.

Rhaegar was killed in “Robert’s Rebellion,” during a battle called the Battle of the Trident by Robert Baratheon, Lyanna Stark’s betrothed. Robert was king and sat on the Iron Throne when Game of Thrones first began, and he and Ned Stark were close friends. Robert is also the father of fan favorite Gendry.

Robert killed Rhaegar with a single blow from his warhammer. Rhaegar was wearing armor encrusted with rubies, and the rubies were scattered under the water. Shortly after his death, Jaimie killed Rheagar’s dad, The Mad King.

Interestingly, Gendry has started using a hammer himself, just like his dad. Even though Gendry never knew Robert, he’s taking on a lot of Robert’s qualities. But he is also kinder than Robert was. If Gendry ever had a chance to be king, he would likely make a good king. 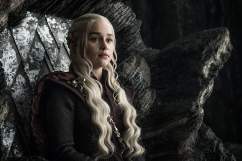 ‘Game of Thrones’: How Are Jon Snow and Daenerys Related?

Read More
Game Of Thrones, HBO, TV
How did Rhaegar Targaryen die on Game of Thrones?