I want to take YOU out for dinner… or we could just skip straight to dessert if you prefer ? It’s all to support W.E. Can Lead. So, will you join me? Click the link in my bio or go to omaze.com/idris for your chance to enjoy a lovely night.

Idris Elba is an eligible bachelor in Hollywood and women across the country fell in love with him when he starred in the movie Obsessed with Beyonce. Currently, he’s promoting his movie The Dark Tower and making appearances on different shows to talk about the film. As we see him all over the small screen in addition to the movies, many wonder about his love life and his dating past. Let’s get into the list of ladies who have been linked to Elba.

Sonya Nicole Hamlin was married to Elba for less than a year and the two tied the knot in 2006. According to Daily Mail, the marriage lasted just four months and the couple got hitched at the Little White Wedding Chapel, Las Vegas. Hamlin was a lawyer in Las Vegas and she was the one who filed for a divorce, but was granted an annulment. The reason for the disconnect, a friend of Hamlin’s told the Sun, was:

One of the reasons it ended was her practice was doing well here [in Nevada] but Idris wanted to be in L.A. At some point he had a choice between being a husband or a heartbreaker. He chose his career over her. She cared about him and when they broke up it tore her up.

As for what Hamlin herself had to say, she explained to The Daily Mail:

He was being told it was an important part of his image to be a single sex symbol in Hollywood and being married would damage that. It was very sad. Idris and I were madly in love, but he was getting a lot of flak for being married.

Naiyana Garth is an ex-girlfriend of Elba’s, who was separated from him just before he suddenly married Hamlin. Garth is the mother of Elba’s son Winston. Rapper K Michelle said that she had an affair with Elba when his son Winston was a newborn baby, according to Daily Mail. Elba was also spotted out with Naomi Campbell when with Garth.

Meet The Woman Who Claims She’s Idris Elba’s Secret 2nd Wife • How He Dumped Her To Save… https://t.co/QgOZNuXjXU pic.twitter.com/GqlsIiAsMJ

Norgaard is the mother of Elba’s daughter Isa Elba and since her break up from Elba, she has moved on to marry Pastor Andrew L. Friar, II. Upon marrying Friar, Norgaard told Electronic Urban Report:

For the woman I am now, I am so blessed to share my life with Andrew. Not only is he a man of God, but his patience, understanding and confidence in what we have never ceases to amaze me. God couldn’t have given me more.

She then reflected on her marriage to ex-husband Elba and she reflected on the beginnings of his career as an actor. Norgaard dished:

I knew he would be a great actor. He showed amazing promise when we were young and there was no doubt in my mind that he would surpass many, but how his public reacts to him, I never even considered. It had no place in my thought process and tickles me now … I knew that what Idris wanted to achieve would take major sacrifices, so I held on for the ride. But I must say, I am very happy with how things have turned out for us all. 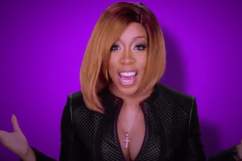 Read More
Celebrities, Idris Elba, TV
Get the rundown on Idris Elba's dating life, from his girlfriends, to ex-wife number one and two.