While half the country is obsessing over today’s solar eclipse, there are also millions ready to watch a new episode of Bachelor in Paradise. Unfortunately, there is no new episode at 8 p.m. ET/PT tonight due to a sporting event. A one-hour episode will be featured later on in the evening because The NFL’s New York Giants and Cleveland Browns are taking over ABC from 8 – 11 p.m. ET/PT tonight instead. But, there will be a brand new episode airing tomorrow night as well and we’ve got the rundown on what to expect from that episode, as well as the time schedule for this season of Bachelor in Paradise and other details. Read on below for all the info.

EPISODE 4 OFFICIAL ABC SYNOPSIS: Two new arrivals bring sex, jealousy and deceit to Paradise (or rather, even more sex, jealousy and deceit). The first arrival has her eyes on the prize that another woman thought she had won on the last episode … A woman receives a date card but struggles to find someone to ask her out; a meddlesome matchmaker makes people angry; a woman decides to leave before the rose ceremony; Chris Harrison answers questions about a controversy. 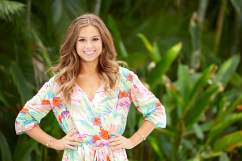 Read More
Bachelor In Paradise, Reality TV, TV
Is there a new episode of Bachelor in Paradise on TV tonight? Get the rundown on the time and schedule for the show.