Game of Thrones Season 7 Episode 4, “The Spoils of War,” was phenomenal, possibly the best episode in the entire series so far. But there are a few key questions that fans have now that the episode is over. And one of the key ones is about one of Daenerys’ dragons.

This story has spoilers for Season 7 Episode 4 of Game of Thrones.

Do not read on unless you’ve already seen tonight’s episode.

Is Drogon going to be OK?

Fans were on the edge of their seats during the episode when Drogon and Daenerys and the Dothraki are fighting the Kingsguard. We all know about the “scorpion” weapon that Qyburn invented. And fans were really nervous that Drogon might get hurt or (shudder) worse.

Since we’ve lost so many direwolves — only Ghost and Nymeria are left — fans were especially worried about Dany’s dragons, the only other beloved magical creature on the show.

Thankfully, it looks like Drogon is going to be OK.

When he was first hit by the Scorpion’s spear, he started to fall and it looked like he might have been hit in the head. The way he plummeted looked like he had a serious hit.

But then as he neared the ground and stabilized himself, we realized that he had been hit in the shoulder area. He breathed fire on the Scorpion weapon and destroyed it, and then landed safely, with Dany working on getting the spear out of his side.

Drogon looked pretty darn fierce when Jamie tried to attack Dany. Doesn’t look like he’s close to dying at all:

So it looks like Drogon is going to be OK, and fans are rejoicing. 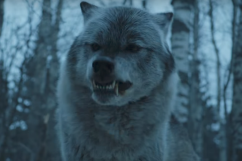 How Many Direwolves Are in Game of Thrones?

Read More
Game Of Thrones, HBO, TV
What is going to happen to Drogon? Find out more here. (Spoilers through Season 7 Episode 4 of Game of Thrones.)