We saw an interesting side of Morty on Rick and Morty Season 3 Episode 6: Rest and Ricklaxation. We saw a confident Morty who was highly successful. Although we’ve been seeing hints of this already, it was interesting to see him at his height of success.

Does this mean that an unhindered Morty is just as smart as Rick?

We’ve been getting hints about that all season. Remember how easily Morty could solve drunk Rick’s puzzles in Vindicators 3? And remember how Rick was helping Morty defuse the neutrino bomb that Rick had made?

Then last week, Morty figured out how Rick’s Morphizer worked. And he figured it out so well that he could turn his mom and sister back to normal and get revenge on Summer’s boyfriend, without having to consult Rick at all.

We’re seeing that unlike statements made about Morty earlier in the series, he might actually be just as smart as his grandfather.

Now in this episode, when Morty was unfettered by a conscience and unfettered by insecurity, he skyrocketed into success. Does that sound familiar? Rick often is unfettered by ethics, and he’s absolutely brilliant. Morty becomes the same when working under the same rules. In fact, in this episode he seemed to even be smarter than Rick at some points, able to outsmart Rick and hide away where he couldn’t be found until he was ready to give himself up.

Last week, I wrote an article about whether Morty was “literally” turning into Rick through some strange time travel glitch we haven’t yet seen. I don’t think that’s actually the case, but I do think we’re seeing the beginning of a Morty who can stand toe-to-toe with his grandfather and eventually be his peer and equal in every way.

Interestingly, this idea was echoed by a comment left by Reidel Bibbs, who read last week’s story. You can read his comment here. The theory is that Rick’s first Morty was the Evil Morty, and he had tried to help that Morty become as much like himself as possible. But in the process, Morty became so smart that he turned evil and could outsmart Rick all the time, eventually setting out to kill Rick. Now Rick is trying to correct those mistakes with the Morty we know.

What do you think? Is Morty as smart as Rick? Let us know in the comments below. 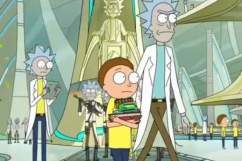 Is Morty Turning Into Rick? [Season 3 Episode 5 of ‘Rick and Morty’] 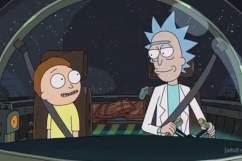