In Rick and Morty Season 3 Episode 5, it really is starting to look like Morty is turning into Rick. This is fueling a lot of fan theories (and a lot of fan worries.)

It really seems like Morty may be turning into Rick. At least, that’s one interpretation of how we’ve seen him acting lately.

At the end of Season 3 Episode 5, Morty sat menacingly next to the Morphizer, threatening Ethan for hurting his sister’s feelings when he broke up with her. We found out in the after credits scene that he had actually mutated Ethan and left him tortured and in pain.

Morty is responsible a lot of times, looking out for his family, but he’s also getting smarter and more competent. But with that competency, a dark side is emerging. You could argue that Beth has this dark side too, since she was building a weird sculpture with a horse hoof attached to it and she was so engrossed in herself that she didn’t even care about Summer’s pain for a while.

But Morty is a different kind of dark, it seems. A dark that comes with a lot of intelligence. He’s able to fix Rick’s neutrino bombs for him (because he’s had to do this a lot), and now he’s taking Rick’s experiments and punishing people who go against his own moral code, making himself judge, jury, and executioner. It seems like this is very much something that Rick would do.

So does this mean that Morty is psychologically becoming more and more like his grandfather, despite how shocked he was by Rick’s actions in the past? It’s possible.

There’s another fan theory circulating that Morty is Rick, and somehow traveled back in time and grew up to become him. I’m not really a big fan of this theory, but I’ll present some of the evidence for it anyway. Fans who are proponents of this theory are thinking it may have started to happen tonight.

When Rick and Morty visited the Citadel of Ricks, they saw a ton of Mortys walking around. But one of them was older, taller, and looked a lot like Rick. Here’s the photo again, which is also at the beginning of this story:

In Rick’s fake memory in Episode 1 of Season 3, he mentioned that he used to wear blue pants, and he kind of resembled this slightly older Morty when he portrayed his younger self in those memories.

Fans are also saying that when Morty solved all of Rick’s puzzles so easily last week, it was another sign that he thinks a lot like Rick and is starting to become him.

But I personally don’t really buy this theory. I think that as Morty gets older, his hair may turn grey like Rick’s and he may adopt a similar haircut. But the RickMorty we saw at the Citadel didn’t have eyebrows, like Rick does, and he had a different nose and a different-shaped face. There’s a possibility that it was a strange RickMorty combo that was created in a science accident, however.

I do think it’s possibly that Morty is becoming more and more like Rick emotionally, on a psychological level. And it will be interesting to see how that turns out for him.

For another theory about what’s happening to Morty, see our story below. 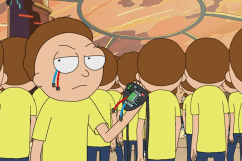 Did We See the Birth of Evil Morty on ‘Rick and Morty’ Season 3 Episode 5?