Jerry Lewis, the legendary comedian and actor, had died at age 91. His death followed a hospitalization in Las Vegas earlier this summer. He died of natural causes.

“Famed comedian, actor and legendary entertainer Jerry Lewis passed away peacefully today of natural causes at 91 at his home in Las Vegas with his family by his side,” his family said in a statement to the Las Vegas Review-Journal.

Lewis was one of the greatest comedy stars of the 20th century, with countless great films on his resume. Despite never earning an Oscar nomination, many of his films are now considered some of the funniest ever made, including the near-silent joyful The Busboy and the outrageous The Nutty Professor. He never fully retired, making one last starring role in Max Rose.

In 2009, Lewis received the Jean Hersholt Humanitarian Award from the Academy of Motion Picture Arts & Sciences for his muscular dystrophy telethon. He also received a special Governor’s Award from the Television Academy in 2005. He received the Lifetime Achievement Award in Comedy from the American Comedy Awards in 1998.

Here is what you need to know about his life and death.

Lewis’ death was first announced by Las Vegas Review Journal columnist John Kastilometes on Twitter. “Legendary entertainer #Jerry Lewis passed away peacefully today of natural causes at 91 at his home w/ family by his side,” he wrote.

Very sad to report entertainment legend #JerryLewis has died today at 9:15 a.m. at his home in Las Vegas. He was 91.

Lewis is survived by his seven children, including singer Gary Lewis of Gary Lewis & The Playboys. He was married twice, first to Patti Palmer from 1944 to 1980, then to SanDee Pitnick from 1983 until his death.

Of his seven children, two were adopted. Lewis and Palmer had six children, including Gary and the late Joseph Lewis. Lewis and Pitnick also adopted a daughter, Danielle, who was born in 1992. 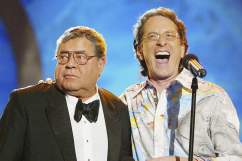 2. Lewis Was Hospitalized in Las Vegas Earlier This Summer

Lewis spent much of the summer in the hospital. As KSNV reported on June 3, his spokesman confirmed that he had a urinary tract infection and was only taken to the hospital because of his age. ON June 5, his spokesman told Fox News that he was “making progress” and the medication was working.

The hospital stay was expected to be short, but 12 days later, he remained hospitalized.

“You could die from being a celebrity,” Lewis told People Magazine in 1983. “Some medical personnel are intimidated and move with uncertainty. It’s scary because in medicine, time is the difference between making it or not.”

Lewis never officially retired. Last year, he appeared in the film Max Rose. The film was made in 2016, but didn’t hit theaters in the U.S. until September 2016. Written and directed by Daniel Noah, the film earned mixed reviews and turned out to be the next-to-last last film Lewis starred in that was released in the U.S. before his death. Max Rose was his first leading role in 20 years.

During his career, Lewis was never nominated for an Oscar, although he picked up a Golden Globe nomination in 1966 for Boeing, Boeing. Amazingly, despite giving one of his best ever performances in Martin Scorsese’s The King of Comedy, that role only earned him a BAFTA Film nomination in 1984.

While doing press for Max Rose, Lewis gave an emotional interview with Inside Edition about death.

Lewis, who was born Joseph Levitch, was born in Newark, New Jersey in March 1926. He started performing at age five with his parents in the Catskill Mountains. By the time he was 15, he created his own act called the “Record Act,” where he would mime songs while a record played.

Lewis wasn’t able to serve in World War II because of a heart ailment. He gained fame as part of the comedy duo Martin and Lewis, where singer Dean Martin was his straight man. They made several films together, but in the mid-1950s, Lewis decided to go solo.

“They loved each other,” Martin’s daughter Deana told Vanity Fair in 2016. “There was something amazing about Dad. He was nice and sweet and kind to everyone, and he would let things go. But when he had it up to here, he’d had it up to here. There was no fight or any yelling. He would just be done.”

Martin and Lewis did reunite in 1976 for Lewis’ Muscular Dystrophy Telethon. It was the first time they’d seen each other in 20 years and the meeting was arranged by Frank Sinatra. The meeting was a complete surprise and happened right after Sinatra finished performing. “You son of a bitch,” Lewis was heard saying.

After Lewis split from Martin, he focused on filmmaking, become a Hollywood auteur who would later be beloved by the French. His films as director and star include the classics The Bellboy, The Ladies Man, The Nutty Professor and The Patsy.

Lewis also wrote, directed and starred in the infamous The Day The Clown Cried. In the film, Lewis played a clown whose job was to make Jewish children laugh as they were led to the gas chambers during the Holocaust. He kept the film from ever being released and he thought it was a terrible movie.

In an interview with The Hollywood Reporter in 2014, Lewis said he kept up with new Hollywood movies, even seeing 12 Years A Slave and called Jennifer Lawrence his favorite modern actress. The two-time Oscar host also said he likes Ellen DeGeneres, but wasn’t a fan of her famous pizza stunt.

“I’ve worked under the most painful conditions any man has ever felt in his life,” he told THR in 2014. “But when I walk out on that stage, the pain goes away.” 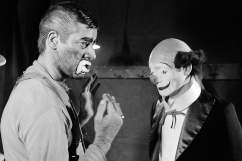 ‘The Day The Clown Cried’: 5 Fast Facts You Need to Know

5. He Held an Annual Telethon to Raise Money for Muscular Dystrophy Research

Lewis is fondly remembered by many for his annual Muscular Dystrophy Telethon. He started hosting a telethon for the Muscular Dystrophy Association in 1952 with Martin and was their national chairman and spokesman until 2011. The telethon became an annual Labor Day tradition as the Jerry Lewis MDA Labor Day Telethon in 1966. He hosted it until 2010.

As USA Today reported, the MDA tried to keep the telethon going without Lewis, but finally ended it in 2015. Since it started, the telethon raised over $2 billion for the MDA. At one point, the show was 21 hours long, but was just two hours in its final two years.

“The success that I’ve had in the US was predicated by the fact that I had all the unions … and they were there supporting me from day one,” Lewis said during a 2011 trip to Australia. “And after 61 years we totaled what I’d raised to be $US2.6 billion to date.”

The telethon’s ending song was “You’ll Never Walk Alone” from the Rodgers & Hammerstein musical Carousel. In an interview with the Television Archive, Lewis said this was inspired after a visit with a 12-year-old boy in Chicago who had spinal atrophy. The boy suggested the song become a theme song for children suffering from muscular dystrophy.