Getty Katy Perry performs on day 3 of the Glastonbury Festival 2017 at Worthy Farm, Pilton on June 24, 2017 in Glastonbury, England.

Katy Perry fans are well aware that the “Roar” singer has been experimental with her hair over the past few months.

Originally known for her dark brown long locks, Katy now rocks a short bleached blonde pixie cut, which she got in March.

The singer has only recently opened up about the reason behind the change. According to Glamour Magazine, Perry began promoting her new album by live-streaming her life, which included live-streaming a trip to one of her therapy sessions. In the session, Perry is quoted as saying, “People talk about my hair, right? And they don’t like it, or they wish that it was longer. I so badly want to be Katheryn Hudson [Katy’s real name] that I don’t even want to look like Katy Perry anymore sometimes, and that is a little bit of why I cut my hair.”

Perry gave another reason for the switch while speaking to People at the iHeartRadio Music Awards in March. “I feel like there’s a new wave, a new authentic vibe coming in and I think this matches. I want to redefine what it means to be feminine. Look at Scarlett Johansson, who’s one of the most beautiful women in the world. We have the same haircut and I saw her at an Oscars party and was like, ‘I’m doing it.’”

In February, Katy was rocking a longer blonde ‘do. This was around the time when she performed her new song, “Chained to the Rhythm” for the first time at the 59th annual Grammy Awards. 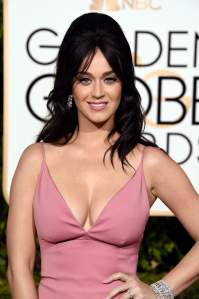 One month prior, her hair was the same dark brown we’ve known for years. At the 73rd Golden Globes, she wore a bouffant-esque hairdo and retro retro pink dress.

Katy Perry will be hosting tonight’s MTV VMA’s, which will air live from The Forum in Inglewood, California. Perry took to Twitter to announce the news in July, writing, “Brace for Impact!” Rumors have already started circulating regarding whether or not Taylor Swift and Perry will reconcile the bad blood between them and perform a duet. VMA producer Jesse Ignjatovic has said that T-Swift won’t be performing, but fans are still holding out hope. 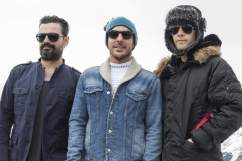 Read More
Celebrities, Katy Perry
Check out pictures of Katy Perry before and after she dyed her signature dark hair to platinum blonde and cut it into a pixie cut.