When Kylie Jenner first got lip injections, she denied she had anything done to her lips for some time, as she was nervous to reveal the truth. After coming clean on Keeping Up With the Kardashians, fans responded positively and her lips practically became their own brand. Jenner’s fame skyrocketed and now she has her own reality show called Life of Kylie. She also successfully came out with her own cosmetics company, which includes her famous lip kits. Her range in cosmetics continues to grow and she has even incorporated some of her sisters in the production of several lines.

In addition to having a cosmetics company, Jenner also has her own online shop for fun merchandise and the online store is called Kylie Jenner Shop. The website sells miscellaneous items and on it, Jenner has even teamed up with half-brother Rob Kardashian’s sock company Arthur George. Items on the site include bikinis, lighters, jackets, phone accessories, socks, workout gear, hats, shoes, and other clothes. And, most of the items are currently on sale. Click here to check them out. For those wondering where they can buy Kylie Jenner merchandise other than online, there is a KYLIE Pop-Up shop at Westfield Topanga for a limited time only. Jenner also previously had a pop-up shop in NYC with a Lip Kit Wall. So, you should check in on her website every now and then because you never know if a shop will pop up in your area.

For Kylie Cosmetics, you can click here and check out all the different categories of makeup products for sale. Jenner’s current promotion is for her Birthday Collection, which includes makeup brushes, cosmetics bags, face makeup and lip products.

On Jenner’s new show Life of Kylie, her cosmetics line is definitely talked about, in addition to her personal and dating life. At just 20 years old, Jenner has amassed an estimated net worth of $30 million and she is building her own empire. In recent months, she and sister Kendall Jenner struck up a deal with Nordstrom and Revolve Clothing for shoes, swimwear, dresses and other clothing items. The two sisters have also had many other long-standing deals together. For example, they’ve been designing and representing clothing for Pac Sun for several years. 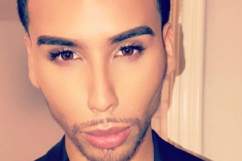 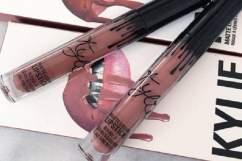 Kylie Jenner’s Lip Kit on ‘Keeping Up With the Kardashians’

Read More
Celebrities, Kylie Jenner, Reality TV
Get the rundown on Kylie Jenner's cosmetics, her online shopping and where to buy her lip kits.