In being a part of AGT, Cox hopes to inspire contestants to never give up on their dreams in life, according to People. Cox explained:

As a guest judge, Cox has the privilege of sending one act straight through to the live shows. Whoever she chooses will get a celebrated send-off with Cox hitting the famous golden buzzer. On the show, Cox says she is taking her golden buzzer very seriously. Cox dished:

Cox is an actress, as well as an LGBT advocate, and was actually the first openly transgender person to appear on the cover of TIME Magazine. She was also a part of the makeover television series TRANSform Me. In an interview with Katie Couric on the show Katie, Cox opened up about being transgender and the concept of surgery, explaining:

The preoccupation with transition and surgery objectifies trans people. And then we don’t get to really deal with the real lived experiences. The reality of trans people’s lives is that so often we are targets of violence. We experience discrimination disproportionately to the rest of the community. Our unemployment rate is twice the national average; if you are a trans person of color, that rate is four times the national average. The homicide rate is highest among trans women. If we focus on transition, we don’t actually get to talk about those things.

Cox actually has an identical twin brother named M. Lamar, who is a musician and he actually appeared on Orange Is the New Black, to play “Marcus,” the pre-transition Sophia. Cox played the role of Sophia. 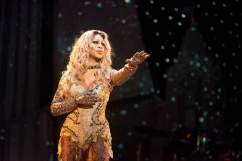