Getty Actors Sam Worthington, Paul Bettany and Chris Noth at the Manhunt: Unabomber panel for the 'Discovery Channel - Discovery' portion of the TCA Summer Event 2017 at The Beverly Hilton Hotel on July 26, 2017 in Beverly Hills, California.

Between 1978 and 1995, Ted Kaczynski killed 3 people and injured 23 others in a mail bombing campaign. He was also a super-genius, and was accepted to Harvard University at age 16.

Read on to learn more about the cast of Manhunt: Unabomber.

Paul Bettany plays serial killer Ted Kaczynski. Bettany went to great lengths to prepare for the role– he retreated to a small cabin in the woods, much like the Unabomber did in 1971, to get into the mindset of the killer.

Bettany is an English actor, known for his role as JARVIS and the Vision in the Marvel Cinematic Universe. He first gained recognition in 2000 for his work in Gangster No. 1 and A Knight’s Tale. Bettany is married to actress Jennifer Connelly, with whom he has 2 children.


Jane Lynch at the NBCUniversal Summer TCA Press Tour at The Beverly Hilton Hotel on August 3, 2017 in Beverly Hills, California.

Lynch plays Attorney General Janet Reno in the series. Speaking to Entertainment Weekly recently, Lynch said, “I was really proud to play Janet Reno. I was a big fan of hers when she was the Attorney General and I’m even more of a fan of hers [now]… She had great integrity and independence and let the facts lead her to where she needed to go in any particular case.”

Lynch is best known for playing Sue Sylvester on Glee. She also gained recognition for her appearance in the mockumentary, Best in Show. For her work as Sue Sylvester, Lynch won a Primetime Emmy Award, a Golden Globe Award, a SAG Award, a TCA Award for Individual Achievement in Comedy, and a Satellite Award for Best Supporting Actress.

Sam Worthington is an Australian actor, who rose to fame as protagonist Jake Sully in the 2009 film Avatar. He played Marcus Wright in Terminator Salvation, Perseus in Clash of the Titans, and also acted in Everest, Hacksaw Ridge and The Shack.

Worthington made his feature film debut in the Australian film Bootmen. He also played the titular character in a contemporary adaptation of Macbeth. In 2004, Worthington earned an Australian Film Institute Award for “Best Actor in a Leading Role” for his work in the film Somersault.

Katja Herbes, 36, is a Dutch actress known for playing Dr. Helen Prins on the series Manhattan. She also plays Joyce on the Dutch show Divorce.

Herbes played Dr. Eden in The Leftovers, and recently, Deadline announced that she’d been added to the season 2 cast of Westworld.


GettyActor Chris Noth at the ‘Manhunt: Unabomber’ panel for the ‘Discovery Channel – Discovery’ portion of the TCA Summer Event 2017 at The Beverly Hilton Hotel on July 26, 2017 in Beverly Hills, California.

Michael Nouri is perhaps best known for for playing Nick Hurley in the 1983 film Flashdance. He’s held a number of recurring shows in TV series like NCIS as Eli David, The OC as Dr. Neil Roberts, and Damages as Phil Grey. 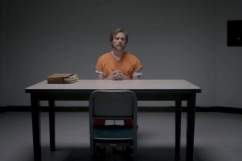 ‘Manhunt: Unabomber’ Discovery Miniseries: What Time & Channel Is It On?