The live-action adaptation of Death Note has finally arrived, but for fans of the anime that may surprise with how many changes were made. While the plot itself is fairly easy to follow, director Adam Wingard decided to end Death Note on a rather big cliff hanger. For those who haven’t watched the film, Death Note follows Light Turner a high school student who finds a mystical object that can kill anyone whose name is written in it.  The user must have a name and a face to kill, however, they can specify the actions of someone for up to two days before they die.

After murdering over 400 people, Light (hiding under the moniker “Kira”) and his girlfriend Mia are pursued by a genius detective only known as L. Aidied by Light’s father who’s a police chief, L manages to figure out who Kira really is and confronts him after Light kills his servant and guardian Watari.

Here is what happens at the end of Netflix’s Death Note:

The final act of Death Note starts at a school dance that Mia and Light are attending. In an attempt to figure out L’s real identity he assumes control of Watari via the Death Note and forces him to locate any records of who L really is. Light’s plan is to burn Watari’s page in the Death Note before his time his up, thus sparing his life. However, as Light speaks to him over the phone he discovers that his page is ripped out of the Death Note, which makes it impossible to stop his death. Watari is gunned down in a records room and Light makes his way back to the dance.

When he arrives, Light confronts Mia who admits it was her and then explains that she has written Light’s name down. Obsessed with obtaining the Death Note herself, she agrees to burn Light’s page if he hands over the object. At the same time, L learns of Watari’s death and is so consumed with rage he takes a gun, steals a police car, and goes in search of Light (Who he has already deduced is Kira). Light goes to retrieve the Death Note for Mia, but when the cops stop the dance he tells her to meet him at a Ferris wheel. Light is seen quickly scribbling something down before he makes a run for it. 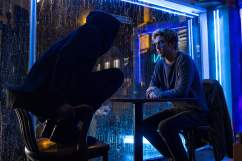 Light is then discovered by L as he makes his way back, there is a chase scene that eventually resolves with Light giving L the slip. Meeting Mia at the Ferris wheel they ride to the top and he shoots out the glass door with a gun he managed to take off an unconscious L. Mia then admits that she loves Light, but takes the Death Note from him anyway. Panicking, Light explains that he wrote Mia’s name down, but that she was only going to die if she took the Death Note. The Ferris wheel then breaks causing them both to fall out, Mia hits the ground and dies instantly while Light lands in the water.

L arrives onto the scene and discovers that Light’s page falls into a fire burning it up. The Death Note is then found washed up on the shore, where it’s taken by an unknown man. We then jump 2 days into the future and learn that Light is in a coma and that the killings haven’t stopped. L is reprimanded for his actions, despite still believing that Light is Kira. The scene shifts to the hospital where the man who finds the Death Note enters Light’s room and gives it to him while he’s knocked out.

Light then slowly awakes, discovers the Death Note and hides it behind his pillow. Soon after, Light’s father James arrives and reveals that he knows his son is Kira. This is proven by him showing Light a picture of the man who killed his mother, which was previously locked in his personal safe before Light took it out to use the Death Note on. Conflicted, James asks his kid to explain how he is still alive and how he goes about kill people.

It’s then revealed that before Light left the high school (Just as the cops arrived) he wrote down that Mia would fall to her death from the Ferris wheel, but Light would land in the water. His page was meant to fall in the fire saving him from the Death Note’s power. Furthermore, Light also wrote that a doctor would pull him from the water, revive him, put Light into what appeared to be a coma, and then commit suicide two days later. As for the Death Note, Light also planned its fate out before he left. In the Death Note, he picked a criminal and caused him to find the book, begin writing down names (presumably to clear Light’s name), and then return the book to him at the hospital before he died.

Every event from the moment Light begins writing after Mia demands the book at the dance was contrived and planned out via the Death Note. Yet, at the same time as Light explains this to his father, L breaks into Mia’s room and discovers a piece of the book. Fueled by rage, he takes the page out, grabs a pen, and stares down at it as if he’s going to write Light’s name. Ryuk (a death god and the books true owner) then appears in the shadows, laughs, and says “Humans are so interesting.”

Death Note then cuts to black without the fate of Light known to the viewer, presumably setting the movie up for a sequel. The entire ending of Death Note is meant to fool the viewer into thinking Light hadn’t planned for any of these events. It’s meant to show that, even despite all the chaos, he was still in control of what was happening.

While we can’t say for certain, it’s highly unlikely that L will write down Light’s name and kill him. Even though it appears that he does, we never truly see what L does or the aftermath of him finding the note book. Much of this could be attributed to the fact that there is a possible sequel on the way, so its lack of explanation could simply be so the writers don’t back themselves into a corner. Death Note is meant to be left up to the viewer so they can decide what events take place. This entire ending is a clear departure from any of the events in the anime (which we won’t spoil here) so we cannot say for certain what the next chapter might bring.