Jersey Shore fans met Nicole “Snooki” Polizzi’s husband Jionni LaValle on the show, as well as on Polizzi’s spin-off shows and the couple is still together, despite their ups and downs over the years.

LaValle appeared on an episode of Jersey Shore as he knew a guest at the house where the cast was staying. Then, at another point, Snooki was out and drunk at club Karma when she met LaValle. The two shared some sloppy dances before leaving together and as the two staggered back to the house, Jionni said to Snooki, “You don’t even remember my name.” While in a relationship and filming the show, Snooki revealed she was pregnant with their first of two children.

While pregnant, Snooki went on to film a spin-off show with LaValle and her Jersey Shore companion JWoww. At the time, Snooki and LaValle were living in LaValle’s parents’ basement while they took on building their own mansion together. Eventually, the couple was able to move out and into their home. On the couple’s reality shows, fans got an inside look at how supportive LaValle’s family was when the couple was trying to get on their feet. But, LaValle’s parents weren’t always so supportive, especially when he first started dating Snooki. Us Weekly previously reported an insider revealing:

Jionni’s mom wasn’t too happy about them dating at first. She thought appearing on the show would make him look bad. That’s where he gets his demeanor from–he wants to stay out of the public eye.

Jionni was raised in Poughkeepsie, New York and later grew up in East Hanover, New Jersey, as the youngest of four kids. Born to Janis and Joe, Jionni’s siblings are James, Joe and Janelle. 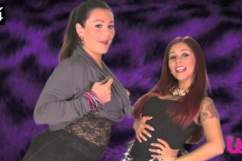