Thursday morning on Good Morning America, the new cast of pros on Dancing With the Stars will be revealed, but a couple names have started to come out all ready. With Total Bellas and Total Divas due back on TV this Fall, Nikki Bella reportedly is seizing the opportunity to be on a third show. She also has some other ventures in the works, like a wine with her sister Brie Bella. E! News reports that although Nikki Bella will be a contestant on DWTS, her twin sister Brie will NOT be joining the show.

Currently, Nikki Bella is inactive with the WWE due to an injury, so she definitely has the time to dedicate. Plus, as a professional athlete, she sure has the discipline to participate in a DWTS competition. Though ABC has not commented on whether or not Bella has joined the cast, E! recently asked if she would be up for joining a show like DWTS. Bella said:

I think so. I think it’d always be fun to dance, and we love being in front of the cameras!

According to People, Property Brothers star Drew Scott is also joining Dancing With the Stars this season. He, like Bella, also has a twin sibling. And, both Nick Lachey and his wife Vanessa are reported to be on board as well.

Together we are making this a better planet for all of us❤️? #Kenya #metowe

The pro dancers have been revealed for this season and some favorites are returning. The pros this season are: 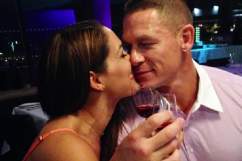