Ric Flair is in the hospital. The WCW icon was reportedly admitted to the ICU over the weekend with “heart-related issues” according to Pro Wrestling Sheet.

Early reports insisted that it was for routine monitoring, but things seemingly took a turn for the worse on Sunday night, when Flair’s representatives told TMZ: “We need your prayers, positive energy, and well wishes for our Living Legend as he is dealing with some tough medical issues.” He is currently in a medically induced coma. Flair is 68.

This health scare has led many to reflect on the life of the beloved ‘Nature Boy’ wrestler, including his greatest matches, his family, and how much money he’s made throughout his career.

Here’s what you need to know about Ric Flair‘s net worth:

1. He Has an Estimated Net Worth of $5 Million

According to Celebrity Net Worth, Flair has an estimated net worth of $5 million. Much of this is the result of his lengthy and lucrative wrestling career.

Flair, born Richard Morgan Fliehr, is often considered to be one of the greatest professional wrestlers of all time and one of the premiere performer of the 1980s. He held the title of NWA World Heavyweight Champion a staggering nine times between 1981 and 1993, during which time Pro MMA reports he earned $700K per year. Flair was also considered a huge pay-per-view attraction throughout his career, and he would go on to headline the NWA/WCW event ten times throughout his career.

As of 2016, Bleacher Report states that Flair was making about $22,000 each month in TNA, but they hadn’t paid him any royalties in six months.

The Face You Make When You have Held Solid Gold Belts 16 Times…….And Counting!!!!! @ricflairshop

Flair’s issues with the IRS have been well documented over the years. According to Bleacher Report, the wrestler failed to pay taxes for the years 1982, 1983, and 1988. By the time the IRS came knocking in 1990, Flair owed a whopping $62K in back taxes. He promptly paid his debt, but the IRS were forced to go after him again in 2000.

Grantland reports that a judgment filed against Flair showed $15,000 in back taxes and late penalties to the state of North Carolina from 1989. Four years later, the federal government issued a lien on Flair’s estate for $874K owed in back taxes from the years 1994-96 and 1998-99.

The most recent development between Flair and the IRS came in 2005, when they began to seize Flair’s WWE earnings as a means of paying off his debts. By December of that year, WrestleZone reports that the IRS had already seized over $200K. Flair admitted that he and his second wife Elizabeth “lived well beyond our means” and that it was the cause of their substantial debt to the IRS and other creditors.

3. He’s Paid Settlements for Each of His 4 Divorces

Flair has incurred a number of expensive divorces over the years. Flair separated from his third wife Jackie Beems in 2011, where they agreed that Flair would $4K a month in spousal support, as well as $15K in legal fees and another $15K to cover the time that they were apart from July to October of that year.

According to The Sportster, however, Flair failed to live up to the agreement. Beems received no payments until April 2012, when she then contacted a lawyer and took her ex-husband to court, claiming that he owned her over $1 million. Flair agreed to pay up. The issue of payment resurfaced in 2013, however, when North Carolina issued an arrest warrant for Flair earlier after he failed to pay an additional $32,000 in spousal support to Beems.

4. He Declared Bankruptcy in 2008 After Opening ‘Ric Flair Finance’

"Diamonds are forever and so is Ric Flair" Own a Piece of History and Get this Beautiful Limited Edition Screen Printed poster of Me! This 18×24 Poster is hand Numbered and Autographed by Yours Truly! A Limited run Of 200 Prints, Released for Sale 20 at a time. A Definite must Have! 102 posters left!!!! @ricflairshop #linkinbio

Flair started an online business called ‘Ric Flair Finance’ in September 2007. The business was intended to refer customers to lenders and inquire about loans. The official website (which you can check out here) even had photos of Flair is his wrestling attire. Sadly, ‘Ric Flair Finance’ lasted less than a year, and closed up shop in July 2008.

Wrestling Inc. stated that the weak economy was the reason for the departure. An member of Flair’s staff claimed that they had been trying to “wrap things up for a while.” Bleacher Report later revealed that the real reason ‘Ric Flair Finance’ was shut down was because their business model “turned out to be completely illegal.”

According to Cage Side Seats, Flair’s business partner Chris Porter went on to sue him for $115,000 from a largely unpaid loan. In a bizarre turn of fate, Flair was right not to pay Porter back, as the illegality of Porter’s model came to light. ‘Ric Flair Finance’ also failed to obtain a broker / lender license during their existence.

5. He’s Been Sued for Millions of Dollars

GettyFormer wrestler Ric Flair attends Game 3 of the 2017 NBA Finals between the Golden State Warriors and the Cleveland Cavaliers at Quicken Loans Arena on June 7.

While divorce and unsound business deals have done little to aid Flair’s net worth, it is undoubtedly his lawsuits that have done the most damage. Dating back to the 1990s, the wrestler has seemingly faced one lawsuit after another for failing to honor financial agreements.

In 1996, a company called Macrolease International sued Flair for failure to pay $66,000 in gym equipment and fees for his Gold’s Gym in Hickory, N.C. Flair opted for a default judgement, according to Grantland, meaning that he chose not to plead or defend himself in any way.

In 2004, Charlotte resident Ward Cagle sued Flair for breach of contract. Cagle had loaned the wrestler $40K in 2000, and though the initial payment plan was for 70 days, Flair failed to pay back the loan four years later. He wrote Cagle a check in 2001 for $44,000, but it bounced. They eventually settled out of court, as Flair paid Cagle $10,000 and gave him a motorcycle.

GettyRic Flair addresses the audience during a press conference on November 18, 2009.

The following year, Flair was sued by BB&T for $35L of a loan they had given him to start a business in 1998. “They just robbed, stole, cheated, and left me holding the debt,” Flair later said in reference to his financial partners. He eventually repaid the loan by himself. 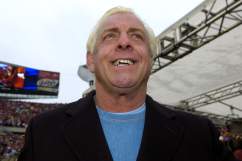