Tonight is the 2017 Teen Choice Awards and stars have lined up on the red carpet to show off their killer looks, along with some crazy outfits as well. The show starts at 8 p.m. ET/PT, but the red carpet stream began at 7 p.m. ET. Check out some of the best dressed celebrities on the red carpet below.

Tonight, Bebe Rexha is one of the performers, joining Louis Tomlinson on stage. On the red carpet, she was one of the stunners and her makeup looked pretty flawless.

Rita Ora was one of the performers who opened up the TCAs tonight. Lil Yachty and KYLE also participated in the opener. For her part, Ora performed her new single “Your Song.”

Pretty Little Liars star Janel Parrish was a winner of the “Choice TV Villain” award tonight and she was also a presenter. Her outfit was one of the more sexy dresses of the night and she rocked it.

Ne-Yo was one of the men who carried out a nicely put-together look on the red carpet tonight.

Lucy Hale joined her former PLL co-star Janel Parrish as a winner on stage tonight. She also rocked the red carpet with a unique, but flirty cut-out dress.

Logan Paul is an internet star, just like his brother Jake Paul, who is tonight’s host of the Teen Choice Awards. Paul shows off his shirt on the red carpet.

Zara Larsson wore two different outfits tonight, as she was a performer. For her performance of the song “Symphony,” she donned a head-to-toe silver sequin dress with an avante-garde design.

Maddie Ziegler has broadened her horizons from Dance Moms to other projects. Check out her look on the red carpet in the above pic.

Naya Rivera kept it casual with the “mom jeans” tonight. Many know Rivera from her days on the musical TV show Glee, but she’s got a new series called Step Up: High Water coming up.

Brie Bella recently had her first baby with her husband and Nikki Bella got engaged to longtime love John Cena this year as well. Now, the two are gearing up for new seasons of their shows Total Bellas and Total Divas.

Many remember Grace Vanderwaal from her win on America’s Got Talent and she also continues to appear on the show as a guest. Check out Vanderwaal on the red carpet as she starts to grow into a young woman.

Tonight, even though Hudgens was sick, she showed up to accept the #SeeHerAward. The award was in honor of her achievements outside of just entertainment.

Fuller House star Lori Loughlin just seems to get better looking every year. Here, she looks bright and full of life on the red carpet.

“It Girl” Paris Jackson dons a simple look on the red carpet. Over the past year, Jackson has come into her own, outside of the shadow of her late father, legend Michael Jackson.

Here, rapper French Montana shows off his jacket, which shows an image of Eddie Murphy as his character from the movie “Coming to America”. Tonight, French Montana is also a performer at the awards show and he performed his song “Unforgettable.” 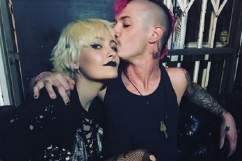 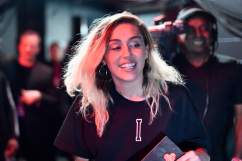 Miley Cyrus – ‘Malibu’ Singer Gets Ultimate Award at the TCAs