The Weeknd was supposed to take the stage at the 2017 VMAs on Sunday night, but as the night progressed, it became apparently clear that he wasn’t there. Rumors that he cancelled his performance had been abundant on social media all night.

According to TMZ, The Weeknd didn’t show up to the VMAs because “he just didn’t feel like it.”

“In his mind, he booked the gig a while ago, before concert fatigue set in, and he just felt differently in the days before the show,” TMZ reported.

Interestingly, The Weeknd cancelled his pre-VMAs show scheduled for Friday night just two hours before he was slated to perform, according to Variety. The site did confirm that he was performing tonight, however.

“A performance by The Weeknd ahead of Sunday’s MTV Video Music Awards was abruptly canceled on Friday night (Aug. 25) two hours ahead of showtime. Organizers of the event, sponsored by Grey Goose Vodka and celebrating the brand’s 20th anniversary, cited “unforeseen production issues,” but Weeknd sources tell Variety the proper permits were not secured.”

The Weeknd has had a pretty incredible year both in his personal life and in his career. For starters, he has been dating songstress Selena Gomez since last December. The two have taken their love all over the world and haven’t been shy when it comes to flaunting their affections for one another.

As far as his career goes, The Weeknd had wild success with his single “Starboy,” which was actually released in November of last year. The song managed to be one of the most popular singles that The Weeknd has ever released. In addition to that, The Weeknd just celebrated his 100th consecutive week on the Billboard 200 albums chart.

He was nominated for several VMAs including Best Direction, Best Editing, Best Art Direction, Artist of the Year, and Video of the Year, all for the video for “Reminder,” which you can watch below. “Reminder” has been viewed over 118 million times on YouTube since it was uploaded on February 16, 2017.

So, what’s next for The Weeknd? It’s possible that he may give himself a little bit of a break. In a recent interview with Harper’s Bazaar, the entertainer discussed “retiring” his persona.

“Maybe I’ll retire from being The Weeknd, or maybe I’ll just give him a break,” he told the magazine. Does that mean that The Weeknd won’t make more music? It could. But that doesn’t mean that the man behind the act will leave the music business.

“Luckily, the only thing the world demands of me is music. I don’t have to give them anything else for the rest of my life,” he said. 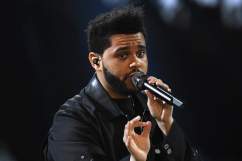 The Weeknd’s Net Worth: 5 Fast Facts You Need to Know

Read More
MTV, The Weeknd, VMAs
The Weeknd was noticeably absent from the VMAs on Sunday night.