This Is Us is staging a Rocky Balboa reunion. NBC announced today that Sylvester Stallone will appear on the hit dramedy as a father figure for Justin Hartley’s Kevin Pearson. Milo Ventimiglia, who played Rocky’s son in the 2006 movie Rocky Balboa, plays Jack Pearson on the show.

“Kevin’s character is shooting his big movie and we needed a big co-star with him,” This Is Us creator Dan Fogelman said at the Television Critics Association Press Tour on Thursday. “And So Sly Stallone is going to come and do a part on the show as Justin [Hartley’s] co-star/father figure on the film.”

The Wrap notes that Fogleman credited Ventimiglia’s friendship with Stallone for helping them get the action star. “We have a great script for him, I think it’s going to be really exciting,” Fogelman said.

The writer didn’t say how many episodes Stallone will appear in, but this is a major coup for This Is Us. Outside of an appearance on Saturday Night Live in 2013, Stallone hasn’t appeared on a television show since he did two episodes of Las Vegas in 2005.

The second season of This Is Us will premiere on Tuesday, September 26 at 9 p.m. ET. Initially, NBC had hoped to move the show to Thursdays, but it was decided to keep the show in the timeslot where it was a big hit for season one. If it stayed on Thursdays, the show’s momentum would also be disturbed by Thursday Night Football and Fogleman wanted the show to air without frequent breaks in the middle of the season.

NBC chief Bob Greenblatt told reporters at TCA that plans for a six-week break in the middle of the season was not a good idea. “We all agreed that maybe the interruption was not the best thing for the show,” he said.

There will also be a special episode airing on February 4 after the Super Bowl.

During the season one finale “Moonglow,” Kevin nabbed a role in a Ron Howard movie and headed back to California. However, it came at an awkward moment, since he just got back with his ex-wife Sophie (Alexandra Breckenridge).

The season one finale wasn’t without its faults. It ended without revealing how Jack died, instead telling us that Jack and Rebecca (Mandy Moore) split before Jack died. We also saw Randall (Sterling K. Brown) deciding to adopt a new baby.

For those new to This Is Us, the show centers on the Pearson family’s past and future. Each episode also has a big reveal and there are still several mysteries to learn about the family in the next season. The show has already been picked up for a third season, which will air during the 2018-2019 season. 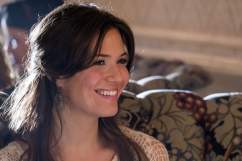 ‘This Is Us’: Find Out When Season 2 Premieres on NBC