In Game of Thrones Season 7 Episode 5, Jorah and Thoros meet and we quickly realize this isn’t the first time they’ve known each other. Some fans may have forgotten their history, so here’s a quick refresher.

Thoros and Jorah Mormont actually go way back. They both fought for King Robert Baratheon during the Greyjoy Rebellion. Together, they went through the breach at the Siege of Pyke. In fact, Thoros used his trademark “sword on fire” when he was the first to go through the breach, followed by Jorah. Thoros used to coat his sword in wildfire to make it burn and intimidate the people he fought.

Jorah was knighted after the battle with Thoros. He described Thoros admiringly as a “mad man” and said being knighted was the proudest moment of his life.

Jorah always remembered Thoros’ bravery. In Season 3, he talked to Ser Barristan Selmy about the Siege and the flaming sword that Thoros used. Later in Season 5, when Jorah is put on auction by Malko in Meereen, Malko said that it was Jorah who had the flaming sword, not Thoros. (But that wasn’t true, he was simply exaggerating Jorah’s accomplishments.)

Here’s Jorah with Jon Snow and Thoros and the rest of the group leaving together at the end of Season 7 Episode 5. The two skilled fighters are finally back together.

Learn more about the group heading north of the Wall below. 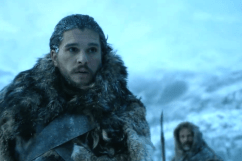 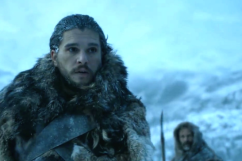 ‘Game of Thrones’: Who Will Go North of the Wall with Jon Snow?