Bonnie Tyler will be performing her iconic song, “Total Eclipse of the Heart,” during Royal Caribbean’s Total Eclipse Cruise during the solar eclipse on August 21, 2017, as reported by Time.

The Welsh singer, 66, will be performing on the ship just as the solar eclipse hits totality. Her performance is backed by pop-rock band DNCE, led by Joe Jonas. To fit the duration of the eclipse, the song had to be cut down to around two minutes and 40 seconds, Tyler told Time.

The 1983 song is considered a classic by many and a favorite for eclipse viewing. But did you know that it almost never happened?

Here’s everything you need to know about the famous song.

“Total Eclipse of the Heart,” one of the decade’s best-selling singles which sold six million copies according to BBC, climbed to the top of Billboard’s Hot 100 according to People, and was number six in Billboard’s Top 100 Songs of 1983, almost didn’t happen.

Tyler’s popularity started to dwindle once her 1978 song “It’s a Heartache,” dropped off the charts, according to People. But after getting a new manager David Aspden and moving away from her record label RCA Records, she reached out to Meat Loaf songriter Jim Steinman.

Steinman initially turned down an offer to produce Tyler’s Faster Than the Speed of Night album, but after listening to her demo tapes the pair met in April 1982. In Steinman’s New York apartment, he played “Goin’ Through the Motions” by Blue Oyster Cult and “Have You Ever Seen the Rain?” by Creedence for Tyler and asked her what she though of them. Steinman later told Tyler that he wouldn’t have worked with her had she disliked the songs because they wouldn’t be thinking on the same terms, Tyler told People. Both songs were included in the album.

Tyler told Time that the artists and repertoire (A&R) person thought that she was crazy and that Steinman would never work with her. Tyler told the A&R person to ask him anyway and three weeks later Steinman finished writing the song for her.

“I wouldn’t have had this hit record without bloody asking,” Tyler told the publication. “And I got it.”

The song’s music video was directed by Russell Mulcahy, who was behind other popular music videos including The Vapors’ “Turning Japanese.” It was filmed at Holloway Sanatorium near Virginia Water, Surrey, England. The video has over 300,000,000 views at the time of writing since its release on YouTube on November 15, 2009.

The song was also certified Platinum by the Recording Industry Association of America for selling over a million copies.

2. The Song Is a Popular Choice During Eclipses

Time reports that music streaming service Spotify tracked a 75 percent increase in streams of “Total Eclipse of the Heart” the day after the solar eclipse of March 2016.

The song is also a favorite for karaoke. “God knows why, because it’s not an easy song to sing,” Tyler told the publication. “But it’s a beautiful song. It’s a massive song, an evergreen song that you hear on the radio all the time, whether it’s an eclipse or not.”

3. The Song Was Originally Conceived as a “Vampire Love Song”

Jim Steinman and Meat Loaf attend at the Songwriters Hall of Fame 43rd Annual induction and awards at The New York Marriott Marquis on June 14, 2012 in New York City.

Steinman included “Total Eclipse of the Heart” in his composition for the 1997 musical Dance of the Vampires. In an interview with Playbill, Steinman said that he had only a month and a half to write the whole show and he needed a big love duet.

He also told the publication that the song was originally conceived as a “vampire love song.”

…with ‘Total Eclipse of the Heart,’ I was trying to come up with a love song and I remembered I actually wrote that to be a vampire love song. Its original title was ‘Vampires in Love’ because I was working on a musical of Nosferatu, the other great vampire story. If anyone listens to the lyrics, they’re really like vampire lines. It’s all about the darkness, the power of darkness and love’s place in dark.

Steinman told People that he also wrote the song to “show off” Tyler. “I never thought it had a prayer as a single,” he said. “It was an aria to me, a Wagnerian-like onslaught of sound and emotion. I wrote it to be a showpiece for her voice.” He told the publication that Tyler’s voice reminded him of Creedence Clearwater Revival’s John Fogerty, one of this favorite male rock and roll singers. He said that her voice isn’t pure or smooth and that it sounded “ravaged, like it’s been through a lot,” which is what rock and roll is all about.

4. Bonnie Tyler Re-recorded the Song Many Times Throughout Her Career

In September 2015, Tyler appeared on the live NBC show Best Time Ever with Neil Patrick Harris performing “Total Eclipse of the Heart” and “Holding Out for a Hero.”

Many artists have covered the song, most notably the stars of Glee in the TV show’s 17th episode of its first season.

A parody of the song called “Total Eclipse of the Heart Literal Video Version,” in which the lyrics were changed to comment on the surreal imagery of the music video, has over 3,000,000 views on YouTube since its release on September 1, 2013.

5. Bonnie Tyler Started Off as a Club Singer Before Becoming a Star

Britain’s Bonnie Tyler performs during the finals of the 2013 Eurovision Song Contest on May 18, 2013.

Tyler, formerly known as Gaynor Hopkins, is one of six children born to a pensioned steelworker and an opera lover, according to People. She grew up listening to Tina Turner and Janis Joplin, and at the age of 17 she answered a newspaper ad for backup singers at a club in South Wales. She eventually married the club’s manager, Robert Sullican.

In 1970, 19-year-old Tyler entered a talent show at a local rugby club and placed second in the contest after singing Mary Hopkin’s “Those Were the Days,” according to BBC. She then became a singer for Bobbie Wayne and the Dixies and then formed her own band called Imagination. After that, she signed a contract for RCA Records in 1975 after being discovered by Roger Bell at a club in Swansea, Wales, according to the publication. She created four albums under the record label.

Her six-nights-a-week schedule at the club caused her to develop nodules on her vocal chords, and in 1976 she underwent throat surgery and spent the next four months after that recovering, according to People.

Tyler would continue to create successful albums and tours throughout her career. In 2013, she was asked to represent the UK at the Eurovision Song Contest 2013 and placed 19th in the contest, according to The Guardian. Tyler won the vote for Best Song (“Believe in Me”) and Best Female Artist in the 2013 ESC Radio Awards poll, according to ESC Radio.

She announced during a October 2016 tour that she is recording a new album with John Carter-Cash, son of Johnny Cash, according to Wales Online. Her latest song is “Love’s Holding On” with German heavy metal band Axel Rudi Pell, which was released on March 31, 2017. 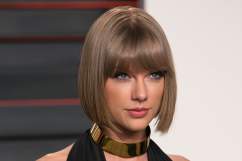