Rapper Travis Scott is currently the boyfriend of Kylie Jenner, who is starring on her own reality show Life of Kylie. Though the couple have appeared to be keeping their relationship private, they were spotted together at the 2017 Met Gala in May. And, Life and Style reports that they got matching tattoos together as well.

Recently, Jenner celebrated her 20th birthday and boyfriend Scott reportedly showered her with attention. BET reported that Jenner woke up on her birthday to a string quartet and a room full of roses. In addition, Scott apparently gifted Jenner a diamond-encrusted butterfly chain that’s estimated worth is $60,000. You can check it out in the below Instagram photo of Jenner, who also happens to be wearing a Travis Scott shirt.

Scott also reportedly got Jenner a birthday cake that read, “Love your Phat P-ssy.” See a photo of it below.

With being in the public eye, there are always rumors. The latest rumors are that Jenner and Scott are expecting a baby and that they’re secretly married. But, despite the rumors, Jenner’s family is said to be very supportive and happy about her relationship with Travis Scott. A source told People:

Kylie and Travis are doing great. Things are so different from Tyga. There is no drama with Travis. He is a cool guy. He treats Kylie with a lot of respect and love. Kylie is very happy.

Jenner and Scott first drew attention when they were spotted together at Coachella in April 2017. 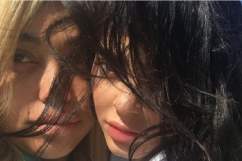 Read More
Celebrities, Kylie Jenner, Reality TV
Who is Kylie Jenner dating? Get the latest on Jenner and her boyfriend Travis Scott.