My little brother is always looking up to me ? Outfit by @fari_hara

Tonight is the premiere of Patti Stanger’s show Million Dollar Matchmaker and the two subjects on the episode are cast members from The Bachelorette and Bachelor in Paradise. Vinny Ventiera and Daniel Maguire are looking for love and Stanger is set to try to help them.

The last time we saw Ventiera, he had been cast aside by Izzy Goodkind on Bachelor in Paradise and tonight, he opens up about the situation. Ventiera explained how Goodkind hurt him, saying:

We solidified our relationship. She said, ‘Yeah, let’s not date anybody else that comes in here.’

Goodkind ended up going after another cast member on the show and when he rejected her, she tried to get back with Ventiera, which was not a successful move. Ventiera says that his problem is he falls in love quickly when he meets someone he likes. As for Daniel Maguire, he’s struck out several times in romance on TV, but hasn’t gotten very far in connecting with someone.

Ventiera and Maguire both vied for the affection of JoJo Fletcher on The Bachelorette, and on tonight’s premiere of Million Dollar Matchmaker, the two compete once again. When Stanger sets up a mixer for the two men to meet women, they end up going for some of the same girls, so Stanger has to put a stop to it.

Couple Pals Strolling Through NYC @danielseanmaguire and I are coming to a TV set near you! #Suits

One of the biggest problems, however, that Stanger deals with in being a matchmaker in general, is ageism, as she tells Entertainment Weekly:

I think there’s a lot of ageism in America going on, and I feel bad for the women that are getting into their 50s and 60s and 70s. I mean, look at Christie Brinkley, and she says no one will ask her out ’cause of her age, and it’s like, Jesus Christ, I’ve seen 26-year-olds [who] don’t look as good as her. So the men are becoming pricks. They’re a–holes right now. It’s a man’s game. It’s horrible. Women have to go to Europe and other countries to find men who will treat them better.

As for her own dating life, she struggles as well, explaining that:

Men are intimidated by our success, our fame. I have a matchmaker that wanted to fix me up yesterday, and he was close to my age, and he was a good fit, everything was great, and then he said, “I don’t want anyone on TV,” because he thinks I’m the character on TV … So he said, well, he didn’t like the person he saw on camera. And she wrote me back and said, “It’s better if people did not follow your career.” I said, “So what’re you gonna do? Tell Julia Roberts and Angelina Jolie that it’d be better if men didn’t follow their careers?” Like, why am I being punished for being successful? And that’s the part I can’t get, because if a man was successful and he was a d–k like Mel Gibson, he would still get women at the end of the day.

In addition to Million Dollar Matchmaker, Stanger has another new reality show coming out, called Love Blows, and that premieres on August 24, 2017. 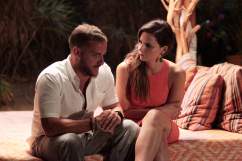 Do Vinny Ventiera & Izzy Goodkind Break Up or Are They Still Together on BIP3?

Read More
Reality TV, TV
Vinny Ventiera and Daniel Maguire have been on The Bachelorette and Bachelor in Paradise, but now they're looking for love on Million Dollar Matchmaker.