Ever since the end of Season 7 Episode 6 of Game of Thrones, fans have been wondering what type of fire an ice dragon breathes. This post will delve into what we know so far, along with what has been said on the subject in the books.

This post will have major spoilers for the Season 7 finale.

Only continue reading if you’ve seen the finale.

At the very end of Season 7 Episode 7, we saw the Night King flying in on the undead Viserion. And Viserion blew out powerful flames of blue fire, over and over and over.

The blue flames were so powerful that the decimated a section of the Wall, allowing the undead army to pass through. See the scene again below.

The best guess we can make about this blue fire, from what we have seen so far, is that it is imbued with some type of magic. We would call it dark, undead magic, except the very first time we saw this magic used was by the Children of the Forest, when they created the Night King and his eyes turned blue. We also saw that when the Children of the Forest were defending the Three-Eyed Raven’s cave from the Night King, they threw rocks that turned blue in their hands and exploded into flames when they hit the ground.

So it’s safe to say that these blue flames are some type of magic, originally passed onto the Night King by the spell the Children of the Forest used to create him.

Prior to this, we didn’t have much to go on when it came to ice dragon fire. What we knew was only through myth and legend within the show’s universe.

In the books, we were told about an ice dragon myth. Legend says they roam the Shivering Sea and the White Waste. They’re larger than Valyrian dragons and made out of living ice. Their eyes are blue crystals, they have a cold breath that can freeze people instantly, and translucent wings. Jon Snow also talks in the books about Old Nan sharing stories of ice dragons.

Here’s a quote from A World of Ice and Fire about ice dragons:

Of all the queer and fabulous denizens of the Shivering Sea, however, the greatest are the ice dragons. These colossal beasts, many times larger than the dragons of Valyria, are said to be made of living ice, with eyes of pale blue crystal and vast translucent wings through which the moon and stars can be glimpsed as they wheel across the sky. Whereas common dragons (if any dragon can truly be said to be common) breathe flame, ice dragons supposedly breathe cold, a chill so terrible that it can freeze a man solid in half a heartbeat.

Sailors from half a hundred nations have glimpsed these great beasts over the centuries, so mayhaps there is some truth behind the tales. Archmaester Margate has suggested that many legends of the north — freezing mists, ice ships, Cannibal Bay, and the like — can be explained as distorted reports of ice-dragon activity. Though an amusing notion, and not without a certain elegance, this remains the purest conjecture. As ice dragons supposedly melt when slain, no actual proof of their existence has ever been found.

According to this myth, dragons couldn’t breathe actual fire because they’re made of ice and that would melt them. But was that really true? The “winter” that comes with The Night King is so strong that fires recede when he approaches them. He’s not hurt by the flames. This might also be why undead Viserion needed a special magical fire and couldn’t simply continue using his old flames.

According to legend, ice dragons breathe “fire” that is so cold it instantly freezes and kills whatever it touches. It’s a deep cold not known anywhere else.

Do you think the flames that undead Viserion was using were incredibly cold flames or incredibly hot? My guess is that they were heated, magical flames. Only magic — not just heat alone — could take down a Wall that was imbued with magic. 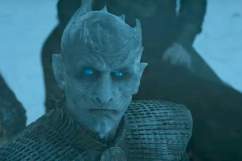 ‘Game of Thrones’ Season 7 Episode 6: Did the Night King Plan This? [Theories About His Powers]