When did we last see Gendry on Game of Thrones? And why is this important?

This post has spoilers for Season 7 Episode 5 of Game of Thrones.

Gendry is finally back on Game of Thrones and fans are ecstatic! He really hasn’t been rowing all this time.

The last time we saw Gendry, he was rowing away:

In Season 3, Arya and Gendry were captured by the Brotherhood Without Banners. Gendry wanted to stay with the Brotherhood and this upset Arya. But Gendry felt like the Brotherhood was the family he never had, so he stayed with them. Sadly, he was wrong. Very wrong. They ended up turning him over to Melisandre.

Finally, thanks to Melisandre, Gendry learned his true heritage.

The bastard of Robert of the House Baratheon, First of His Name, King of the Andals and the First Men. Why do you think the Gold Cloaks wanted you? There is power in a king’s blood.”

Melisandre leeched Gendry’s blood in a ritual. Davos, always a man of honor, eventually freed Gendry and sent him back to King’s Landing via a rowboat. But Gendry doesn’t know how to swim.

The last time we saw him on the show, he was rowing away from Dragonstone, trying to find a way back to King’s Landing.

This video is an hour long, but it tells all of Gendry’s story on Game of Thrones, including the last time we saw him. 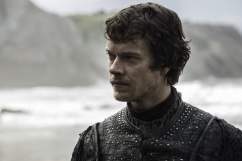 Read More
Game Of Thrones, HBO, TV
Learn all about how long it's been since we saw Gendry on Game of Thrones and what happened.