After watching Rick and Morty Season 3 Episode 4, fans have some big questions about Noob Noob. But the biggest question of all is whether he’s related to a character we’ve already seen on the show, like Noob Noob, Eyehole Man, or even Stealy. Although we don’t know for sure and Dan Harmon seems to be silent on the topic so far, we’ve got some guesses.

Look at the following theories and let us know which you think is most likely.

To refresh your memory before we look at the possibilities, here’s a photo of Noob Noob.

And here’s a video:

First up in the list of possible Noob Noob relatives is Mr. Poopy Butthole. Sure, their voices sound similar, but this might just be because they’re voiced by the same person. But maybe there’s more to that. Maybe Noob Noob is a distant (mutated) relative.

Poopy Butthole is skinnier and has a nose… And he’s a slightly different color. But Noob Noob did slip and fall on some poop and land on his butt in the poop at the end. So couldn’t be a subtle sign to fans that they’re related?
It’s certainly possible, considering that there’s an entire planet of Poopy Butthole’s species. Yes, we learned this in the Rick and Morty comics.

Next up is Stealy! He does resemble Noob Noob, but really only because he resembles Mr. Poopy Butthole even more. In fact, I’d venture to guess that they’re from the same planet, but maybe a different race. Or Stealy is just some weird mutant from Poopy Butthole’s world.

And last but not least… Eyehole Man. Although he and Noob Noob are completely different colors, there really are a lot of similarities. They’re wearing practically the same costume, even down to the eye mask. But Eyehole Man has a neck and more of a regular body than Noob Noob does.

I think I’ve figured it out.

Maybe Noob Noob is the child of Eyehole Man and Mr. Poopy Butthole. To check out the theory, I tried one of those “what would a baby of these two people look like?” apps. Sadly, BabyPictureMaker.com could not honor my request, and MakeMeBabies.com just kept processing the photo when Mr. Poopy Butthole and Eyehole Man’s photos were submitted. But MorphThing made a valiant effort.

First, the photos were submitted and the control points were set.

And then this result was returned:

OK, it kind of looks more like a demon spawn child than the Noob Noob. But I’m still holding to the theory that Noob Noob is the child of a parent from both those species.

Who do you think Noob Noob is related to? Let us know in the comments below. 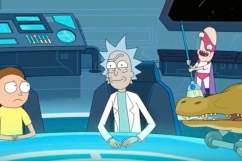