Harry Potter fans everywhere are celebrating the first day of school for the wizarding world and it seems like all is well.

Here’s everything you need to know about the date.

1. It’s 19 Years After The End of Deathly Hallows

The day Albus, James, and Rose are sent to Hogwarts takes place during the epilogue of Harry Potter and the Deathly Hallows, according to Author J.K. Rowlings’s official Harry Potter website Pottermore. This is 19 years after Harry Potter saved the wizarding world from Lord Voldemort.

Albus and James’ sibling Lily Luna was also there to see him off as well as Draco Malfoy’s son Scorpius.

Fans deducted that Harry and friends started their first year of Hogwarts in 1991. Since Deathly Hallows takes place in 1998, the date Albus would go off to Hogwarts would happen in 2017.

today harry, ron and hermione's story together came to an end and their children began theirs…all was well #19YearsLater pic.twitter.com/Y5vL9IDfMs

After a fan noted that Harry’s Godson Teddy Lupin would kiss Victoire Weasley on Platform Nine and Three-Quarters, this was Rowling’s response:

Pottermore hosted a Facebook livestream from Platform Nine and Three-Quarters at the real-life King’s Cross Station today at 11 am BST, inviting hundreds of fans to stand at the exact same spot Harry and co would be standing in the books. Pottermore is also hosting a special quiz on the website at 3pm BST and giving a new digital award to anyone who visits the Wizarding World Book Club.

The platform itself was in on the celebration:

Bloody excellent. Today is Albus Potter – Harry's son's – first day at Hogwarts, and this is the departures board. #19YearsLater pic.twitter.com/46QDajRB41

Harry Potter Fansite MuggleNet is throwing a huge celebration at The Wizarding World of Harry Potter – Diagon Alley at Universal Studios Florida known as MuggleNet Live. Harry Potter alumni are making appearances at panels and will later be roaming around for autographs and photos, including Chris Rankin (Percy Weasley), Christian Coulson (Tom Riddle), Luke Youngblood (Lee Jordan), and Arthur Bowen (Albus Severus Potter). Afterwards there will be a buffet with unlimited Butterbeer, music from Celestina Warbeck and the Banshees, and rides on Harry Potter and the Escape from Gringotts, Hogwarts Express, and more.

Fans are also flocking Twitter to celebrate the date.

In about 3 hours, Albus Severus Potter will get on the Hogwarts Express, and Harry, Ron and Hermione will know all is well. #19YearsLater

Whether I'm in Gryffindor, Slytherin, Ravenclaw or Hufflepuff, honestly Im just proud to be apart of Hogwarts. #BackToHogwarts #19YearsLater pic.twitter.com/qxGG2ciqzQ

All was well #19yearslater pic.twitter.com/0utdkbbrkJ

3. Harry Potter and the Cursed Child is Playing On the 19 Years Later Date

Today, as students go #BackToHogwarts, we celebrate #19YearsLater, the start of our #CursedChild story… pic.twitter.com/4yLg31Qv9B

The London production of Harry Potter and the Cursed Child will be performing on the 19 years later date at the Palace Theatre. That’s because the play takes place immediately after the epilogue.

#19YearsLater has been an extraordinary day so far for the cast and audience members alike. Thank you, #CursedChild fans! pic.twitter.com/wclktiLBn7

The cast celebrated with Hogwarts Express-shaped cake while fans lined up to see the performance.

Previews of the play began at the Palace Theatre on June 7, 2016 and the show officially premiered on July 30, 2016 along with the publishing of the script.

Pottermore launched a free, 360-degree digital experience on the website called the Hogwarts Experience, letting fans explore the halls and grounds of Hogwarts as Variety reports.

Explorable areas include the exterior of the castle, the Forbidden Forest, and the Quidditch pitch. The area is populated with 100 different clickable points that expand to provide details and lore about the location.

“We’ve seen many interpretations of Hogwarts – from the artwork in the illustrated editions of the books to the eight feature films from Warner Bros.,” said Henriette Stuart-Reckling, Pottermore’s global digital director. The Hogwarts Experience is “a unique, mobile-first experience using bespoke visual assets allowing anyone to ‘visit’ Hogwarts on-the-go.”

The Hogwarts Experience is free to all registered users of Pottermore and is available across multiple devices including smartphones, tablets, and PCs.

5. This Isn’t the Only Milestone Harry Potter Fans Celebrated This Year

This year marks the 20th anniversary for the franchise. The first novel, Harry Potter and the Philosopher’s Stone, released in the UK on June 26, 1997.

This year also marks the 10th anniversary of the last book in the series, Harry Potter and the Deathly Hallows, which released on July 21, 2007.

Time estimated the Harry Potter brand’s worth as $25 billion in April 2016, making it the third highest grossing media franchise in history just under Star Wars and Pokemon. Time also estimated the film series to be at $7.7 billion with Fantastic Beasts adding another $800 million for a total of $8.5 billion, making it the second highest grossing franchise in film just under the Marvel Cinematic Universe. Rowling has been named the world’s richest author with a net worth of $1 billion according to the publication. 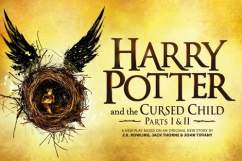