The long-awaited seventh season of American Horror Story has arrived and it’s called AHS Cult. Get all the details on what time the show airs, the cast, what channel to watch and more.

OFFICIAL SEASON SYNOPSIS: The award-winning anthology series returns for a seventh installment, which satirizes the 2016 U.S. presidential election by detailing very different — yet predictable — effects it has on two people in Michigan. In one corner is skittish mom Ally, who co-owns a restaurant with her wife. Ally’s array of phobias pre-election are now getting worse, to the point where she’s hallucinating about such horrors as knife-wielding lunatics in clown costumes. Or are those visions real? Meanwhile, across town is Kai, a representation of sorts of “angry” white males who celebrate the current political climate. He’s Ally’s worst fear, and her weakening grasp on reality produces tragic consequences.

EPISODE TITLE GUIDE: The titles of the first four episodes have been revealed.
Episode 1 – “Election Night”
Episode 2 – “Don’t Be Afraid of the Dark”
Episode 3 – “Neighbors from Hell”
Episode 4 – “11/9” 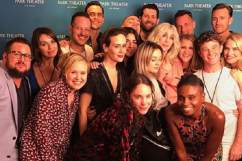