The season finale of American Ninja Warrior is finally here, and fans are itching to know if anyone will successfully complete the course.

Only two competitors have successfully completed the course and achieved “total victory”– Isaac Caldiero and Geoff Britten. Caldiero was the only one to take home the $1 million prize.

– After 10 athletes, no competitors had advanced to the finals

– Sean Bryan is moving on to stage 3!

– Najee Richardson made it through Stage 2, and is the second competitor to advance to Stage 3!

– Joseh Levin lost his balance on the wave runner

– Dave Cavanagh was also having a good run, but lost his grip on the wave runner

– Allyssa Beird lost her grip on the salmon ladder

– Drew Drechsel overshot it on the Wingnuts 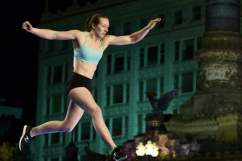