LOVERZ!!!!! I have so much exciting stuff happening to share with you and it's all coming very soon. Click the link in my bio and sign up so you can be the first to know about #allthethings ?To start, I am launching just a few fun things I've designed with all of you in mind, but eventually this will be the space where I share all things me! You will get a chance to get to know me, work out with me, dance with me and chat with me! I love all of you so much and am so freaking excited for you to see the amazing stuff we have so far ❤️

For several years, Burgess was in a relationship with dancer Paul Kirkland, but during season 24 of Dancing With the Stars, Burgess confirmed that she was single to the media. Burgess and Kirkland were together approximately five years before their split. Then, according to E! News Burgess was said to be dating actor and model Pierson Fode.

Though Burgess was connected to Fode in reports, around the same time, in an interview on Entertainment Tonight, Sharna Burgess said:

I’m actually having the time of my life being single. It’s so hard to meet great people and to know if they’re genuine or not. And it’s a genuine concern.

An insider previously told E! News that Burgess and Pierson Fode are absolutely an item. The insider dished that:

Sharna and Pierson are together. She just took him to that James Hinchcliffe race they both posted about on Instagram and were acting affectionate like a couple there. She was at Pierson’s birthday party last week. He even visited her while she was on the road during the DWTS tour months ago.

When it comes to Pierson Fode’s acting, he is most commonly known as Ely in the movie Naomi and Ely’s No Kiss List, alongside Victoria Justice, who he has been rumored to have dated. He also plays the role of Thomas Forrester on the soap opera The Bold and the Beautiful. In addition, Fode models for Wilhelmina Models.

The most recent news about Burgess and Fode’s reported romance came out in April 2017.

Currently, Burgess is a pro contestant on Dancing With the Stars season 25, opposite athlete Derek Fisher. Recently, Burgess gushed about Fisher on her Instagram account, writing about their experience in training for DWTS. Burgess wrote:

For a man with no dance experience, and having to take on 2 dances in week 2… as your coach I just couldn’t be more proud of you. I love the way you learn, that you’re even more of a perfectionist then I am, and that you always walk into the studio with a positive attitude ready to give me your all. I love our team, and tonight you’re our point guard, so let’s bring it home D FISH!!!

Cross your fingers that Burgess and Fisher make it to next week on DWTS. 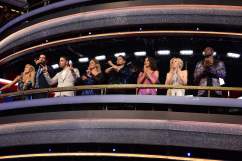