Comedian/rapper Donald Glover has already won two Golden Globes for his acclaimed FX series Atlanta. Tonight, he’s hoping to add Emmys to the collection. The critically acclaimed sitcom, which pushes the very definition of that term to its breaking point, was nominated for six Emmys.

Atlanta aired last fall and might not be back for a second season until next year. Glover held off on making the next season to concentrate on other projects, including playing Young Lando Calrissian in the upcoming Star Wars Young Han Solo movie. Glover also has a music career as rapper Childish Gambino.

In the series, Glover stars as Earn, a man who has no money and no prospects, and is hoping to redeem himself in the eyes of his daughter’s mother, Van (Zazie Beetz). Along the way, he tries to manager his cousin, rapper Paper Boi (Bryan Tyree Henry). Keith Stanfield also stars as Darius, the “visionary” behind Paper Boi. The show won Best TV Series – Comedy/Musical and Best Actor – Comedy/Musical at the 2017 Golden Globes.

Atlanta is hoping to break the stranglehold HBO’s VEEP has held on the Outstanding Comedy Series category. Amazingly, just two different comedies have won in this category since 2010. From 2010 to 2014, ABC’s Modern Family won ever year. Since 2015, VEEP has been the winner. Atlanta has a chance to break that streak and is the only freshman comedy up for the award.

The other nominees are Netflix’s Master of None and Unbreakable Kimmy Schmidt; Modern Family (again for some unknown reason); and HBO’s Silicon Valley. Since the TV Academy doesn’t have a strong track record of honoring new comedies – no matter how critically acclaimed they are – Atlanta‘s chances are slim.

The show’s best chance of winning a major award is right here. Although the series featured great performances from the rest of the cast, Glover’s was the only one nominated. Jeffrey Tambor has won in this category the past two years for Amazon’s Transparent and could pull off a three-peat.

Notably, four of last year’s nominees are up for the award again, including Tambor; Aziz Ansari of Master of None (Netflix); William H. Macy of Shameless (Showtime); and Anthony Anderson of Black-ish (ABC). The only other new nominee aside from Glover is fellow FX star Zach Galifianakis of Baskets.

Outstanding Directing for a Comedy Series for Donald Glover (for “B.A.N.”)

Glover’s next nomination is for directing the episode “B.A.N.” This was easily one of the most gutsy half-hours of television during the past season. Glover’s Earn character didn’t appear at all. Instead, Paper Boi was featured in an episode of a fictional show called Montague, and he had to discuss black culture’s relationship with the transgender community. Glover even came up with parody ads that played before real commercials.

There are six nominees in the Comedy Directing category, but only three different shows were nominated. The Silicon Valley episodes “Intellectual Property” and “Server Error,” directed by Jamie Babbit and Mike Judge, respectively, were nominated. Morgan Sackett, David Mandel and Dale Stern were nominated for directing the VEEP episodes “Blurb,” “Groundbreaking” and “Justice.” Transparent creator Jill Soloway, who won the past two years, wasn’t nominated.

Notably, this is the first time there are no women in this category since 2010. A woman has won this award every year since 2013. (Before Soloway’s two wins, Gale Manusco won back-to-back for Modern Family episodes.)

Outstanding Writing for a Comedy Series for Donald Glover (for “B.A.N.”) & Stephen Glover (for “Streets on Lock”)

It’s fitting that the only category Atlanta has to compete against itself in is for its writing, one of the strongest aspects of the series. Glover was nominated for writing “B.A.N.” His brother, Stephen Glover, was nominated for the episode “Streets on Lock.”

Ansari could pull off a repeat win here, since he won last year for the acclaimed “Parents” episode of Master of None with Alan Yang. This year, he’s up for “Thanksgiving,” which he co-wrote with Lena Waithe. The other nominees are Alec Berg’s “Success Failure” episode of Silicon Valley; and Billy Kimball’s Georgia and Mandel’s Groundbreaking from Veep. 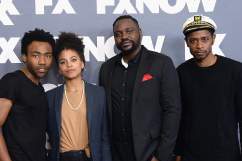 Atlanta was nominated for Outstanding Casting, but Veep won the award at the Creative Arts Emmys. The other nominees in this category were the casting teams from Transparent, Master of None and Silicon Valley.