Corey McClendon has been arrested following the Young Dolph shooting that took place in Los Angeles on Tuesday.

According to the Los Angeles Times, LAPD spokeswoman Detective Megan Aguilar said that McClendon was arrested early Wednesday morning “near Highland Avenue and Hollywood Boulevard [following the] Tuesday afternoon attack and has been booked on suspicion of attempted murder.”

Jail records indicate that McClendon is being held in lieu of $1 million bail, according to the report.

According to USA Today, McClendon is an “associate” of rapper Yo Gotti. He has been involved in fights with Yo Gotti in the past.

“McClendon, 43, is a known associate of Gotti (real name Mario Mims), who was charged with nine other men with aggravated riot in a melee that led to the shooting of six people in the parking lot of nightclub in Memphis in November 2010. Local media reports at the time said McClendon, then 36, was one of the men charged after he and Yo Gotti  got into an argument with another rapper, OG Boo Dirty. But a few months later, all charges were dropped by the Shelby County District Attorney’s Office because there weren’t enough witnesses to the fight.”

Further details about McClendon — including his mugshot photo — were not available at the time this article was published.

The Young Dolph shooting occurred in broad daylight in the valet parking area of the Loews Hollywood Hotel at the intersection of Hollywood and Highland, according to KTLA. Rapper Young Dolph had been staying at the hotel, along with some others, including Yo Gotti, who has been named a “person of interest” by the LAPD.

The police say that a disagreement broke out and that shots were fired shortly after. Dolph was shot in the arm and in the rear, according to TMZ. He is in stable condition and is expected to be okay. 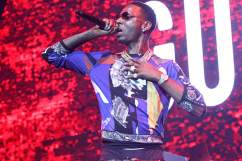