Last night on Dancing With the Stars, the first contestant to be eliminated for season 25 was Shark Tank star Barbara Corcoran. Upon hearing the results, Corcoran joked that she should stick to real estate. As for her pro partner Keo Motsepe, he spoke about his experience with Corcoran, saying:

It was amazing. I had a good time in rehearsal. I never stopped laughing, that’s for sure. I was very humbled to dance with her. I enjoy every time I spend with her, so I’m grateful.

There is an extra episode of DWTS this week and the theme of the show tonight is “Latin night”. With another episode, also comes another elimination. To get an idea of what to expect, check out the contestants’ scores from last night, including cast-off Corcoran.

Nick Lachey and pro partner Peta Murgatroyd suffered a wardrobe malfunction, which is believe to be the reason for their performance faltering. As for Derek Fisher, he just didn’t have as high of scores as some of the other contestants. And, Property Brothers star Drew Scott was criticized by the judges, though he was nursing a hamstring injury. So, who do you think will be sent home tonight? Every now and then, the votes just don’t come in for the right people and some of the big stars are sent home, so anything could really happen.

Last night, Terrell Owens and pro dancer Cheryl Burke were in the bottom of the votes, in jeopardy along with Barbara Corcoran. Hopefully for Owens, he attained enough votes last night to put him through to next week. And, hopefully for Nick Lachey and 98 Degrees fans, his wife’s amazing abilities on the dance floor and her vivacious personality help him out as well. Plus, Lachey’s brother Drew is a former winner on the show. The pressure is definitely on for him.

Our predictions are that Derek Fisher or Terrell Owens could be going home. We’re crossing out fingers for Nick Lachey to pull through.

As for what’s in store for Latin night, every couple will perform a samba, rumba, cha cha, Paso Doblé, Argentine Tango or salsa. Here’s the lineup of tonight’s performances, in alphabetical order. 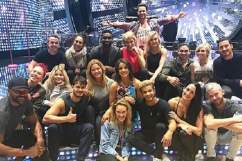