The season 25 premiere of Dancing With the Stars airs tonight and the cast of pros on the show is gearing up for a brand new bunch of celebrity participants. The premiere starts tonight at 8 p.m. ET/PT on the ABC network and all the judges, along with the usual co-hosts, have returned. Julianne Hough, Len Goodman, Carrie Ann Inaba and Bruno Tonioli are back on the judges’ panel, with Tom Bergeron and Erin Andrews as the show hosts.

Now let’s get into the contestants and the performances they have lined up for the premiere.

Nikki Bella & Artem Chigvintsev – Tango – “So What!” by P!nk

Dancing With the Stars is known for its larger than life opening sequences for each episode. Tonight’s premiere will incorporate the full cast, along with the judges, and it will be choreographed by Mandy Moore.

One very new aspect of the series this season is the fantasy league. ABC has launched the first-ever official Dancing with the Stars Fantasy League on abc.com/dfl. The game allows its players to guess which couple will win season 25 of the show and take home the coveted Mirrorball Trophy. Players earn points for correct predictions about the contestants, which can win them exclusive prizes. 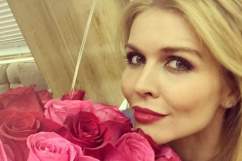