Demi Lovato has sparked rumors of a new romance with Lauren Abedini, a Los Angeles-based DJ who goes by the stage name Kittens. According to Page Six, Lovato was spotted holding hands with Abedini in Disneyland over the weekend, causing fans and media outlets to speculate whether they could be dating.

This is only the latest speculation surrounding Lovato’s love life, as the pop singer has never officially confirmed her sexuality– despite alluding to her being bisexual in her song lyrics.

Here’s what you need to know about Demi Lovato’s sexuality:

good morning to demi lovato and her possible girlfriend and no one else pic.twitter.com/ZrDKzhVBBD

While there’s yet to be any confirmation from Lovato or Abedini’s representatives as to whether they’re dating, fans on social media have been eager to voice their support.

“Demi Lovato spotted with her rumored new girlfriend Lauren Abedini; a DJ, Producer, charity runner, and feminist!” wrote the Lovato fan account Demipedia. Another humorously tweeted”The good news is that Demi Lovato has a girlfriend. The bad news is that it isn’t me.”

Others snapped photos of Lovato and Abedini during their Disneyland trip, with one user posting a comparison of the singer with her ex Wilmer Valderrama and Abedini and joking that she’s made “a big upgrade.”

Check out this post and the rest of Twitter’s reactions below.

The good news is that Demi Lovato has a girlfriend.

The bad news is that it isn't me.

Lovato, like most notable celebrities, have dated other people in the industry. According to Pop Sugar, she dated The Cab frontman Alex DeLeon from 2008-09, and later based the breakup song “Catch Me” on him. Lovato also had brief flings with Trace Cyrus (Miley’s older brother) in 2009 and Joe Jonas, her self-proclaimed “BFF,” in 2010.

Her most notable relationship to date, however, has been with Valderrama, whom she dated from from 2010 to 2016. In an interview with Latina magazine, Lovato discussed what attracted her to the That 70’s Show actor:

When I dated white guys, it wasn’t as passionate as my relationship with Wilmer. Maybe that’s just Wilmer. But I do believe that Latin people are just more expressive, more passionate with their emotions. He’s very manly, and he can be stubborn like Latino men can, but he’s protective and he cares so much and loves so hard. I’ve been blessed enough to have him in my life, and not just as my man, but also my best friend.

Since her breakup from Valderrama, Lovato’s been seen with MMA fighter Guilherme “Bomba” Vasconcelos and Abedini.

In 2013, model and actress Ruby Rose turned heads when she tweeted that she had a lesbian tryst with Lovato. “I’m like the one person demi has slept with that didn’t sell on naked photos of her so eff off,” Rose tweeted out. She went on to say “Think ill take a few days off social media whilst @ddlovato’s friends attack me for being a ‘scorned ex-lover’ get over it! I liked the hair.”

Furthermore, a source for Life & Style said that Rose and Lovato dated for two years while the singer took a break from her relationship with Valderrama.

Lovato addressed these claims in a 2015 interview with Complex magazine. “Rumours are rumours, and people are going to spread them,” she said. “You can believe what you want, but no, I was not in a relationship with her. By the way, love is fluid.”

The singer added “Whether there’s been rumours with one specific person or not, that’s all that matters. Humans are humans, and when you connect with somebody on a spiritual level it doesn’t matter. I don’t want people to ever look at the past or rumours or anything and try to figure me out.”

4.  She Won the GLAAD Vanguard Award for Promoting LGBTQ Equality

While Lovato may be keeping her personal life under wraps, she has made no effort to hide her support for the LGBTQ community. The singer has been so supportive, in fact, that she was given the GLAAD Vanguard Award in 2016, which, according to the GLAAD website, is “presented to media professionals who have made a significant difference in promoting equality and acceptance.”

The award was given to her by close friend and former Camp Rock co-star Nick Jonas. “Demi Lovato has consistently used her platform as a successful artist to send messages of acceptance and support to LGBT people everywhere,” said GLAAD President & CEO Sarah Kate Ellis. “She is an extraordinary ally who is committed to helping young people embrace who they are and live the lives they love.”

During her acceptance speech, Lovato said “You should always love yourself for who you are,” she said. “The skin that you are in, whether you identify with it and are afraid to tell people, just go for it. You can do it!” Watch the full speech above.

5. She Said She’s Not ‘Denying’ or ‘Confirming’ Her Sexuality

Lovato’s 2015 single “Cool for the Summer” had many fans wondering whether or not this was her coy way of speaking on her sexuality.

The lyrics “Tell me what you want, what you like, it’s ok / I’m a little curious, too” and “Got a taste for the cherry / I just need to take a bite” were taken as an admission that she had at least experimented with women in the past.

In an interview with British late-night host Alan Carr, Lovato continued to play coy about her lyrics. “I’m not confirming and I’m definitely not denying,” she quipped with a smile.

“All of my songs are based off of personal experiences. I don’t think there’s anything wrong with experimentation at all.” Carr joked that he “experimented once and it stuck,” leading Lovato to retort:”Hey, I didn’t say it didn’t stick either.” 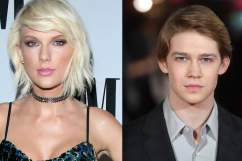