Tonight is the season 2 premiere of Designated Survivor on ABC at 10pm ET/PT.

The series received positive reviews from critics last year, with many saying it was the must-watched drama of the season. In a recent interview with TV Line, ABC president Channing Dungey said that this season will focus on exploring the lives of the characters and their relationships to one another.

Many of the show’s main cast members will reprise their roles, including: Italia Ricci as Emily Rhodes, Seth Wright as Kal Penn, Adan Canto as Aaron Shore, Natascha McElhone as Alex Kirkman, Michelle Q as Hannah Wells, and LaMonica Garrett as Mike Ritter. New faces will also be joining the series.

Read on for info on cast and spoilers.

Paulo Costanzo, from The Night Of, will be joining the cast as political director Lyor Boone. He’ll make his first appearance in tonight’s premiere, when he’ll consistently antagonize Tom.

NCIS and Suits actress Zoe McLellan has been cast as a series regular this season. McLellan will play Kendra Daynes, a brilliant attorney employed as White House counsel. Deadline writes, “Her journey is a personal and professional one, as she develops close relationships with the White House staff while wrestling legal issues that find their way to her desk because she advises the most powerful man in the world.”

Ben Lawson has been cast in a series regular role this season. He’ll be playing Damian Rennett, an MI-6 operative who meets Hannah while working gin Amsterdam.

“One Year In” picks up a year after Tom Kirkman unexpectedly assumed the role as President of the United States. Early on in season 2, someone will consider leaving the administration, while Hannah Wells’ may find herself attracted to a new character on the show.

One big spoiler fans should brace for is the departure of actress Natascha McElhone, who plays President Kirkman’s wife. Deadline recently announced that McElhone will be exiting the show in season 2 to take on a leading role opposite Sean Penn in Hulu’s new show, The First. It’s unclear yet how she will leave the show. 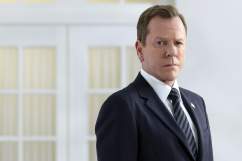 ‘Designated Survivor’ Season 2 Premiere: What Time & Channel Is It On?