Tonight is the season 4 premiere of Empire on FOX at 8pm ET/PT, and its gearing up to be quite the season.

Not only has Terrell Carter, who appeared in a guest spot on the season 3 finale, been upped to a series regular, but Academy Award winner Forest Whitaker has joined Empire in a recurring role. Variety notes that Empire marks a reunion for Whitaker and series co-creator Lee Daniels, as the two collaborated on the 2013 film The Butler.

Demi Moore will play Claudia, a nurse who helps Lucious recover after last season’s explosion. Whether or not she’s a good nurse is up for debate.

In a recent interview with EW, Moore was asked to dish about her character. She said, “She’s evolving and unfolding as we speak. [Laughs] The initial idea was, she had a little unorthodox approach [to rehabilitation]. In the course of her doing her job to help bring him back, it becomes a little bit of: Which version of Lucious is she more attached to bringing back? She sees the real innocent, untainted part of him — the real soul of who he is. So I’m rehabilitating him from the point of view of his most pure self. And his most pure self isn’t necessarily who the rest of them have come to know and love.”

Oscar and Golden Globe winner Forest Whitaker will be playing Uncle Eddie, a music icon who makes his entrance to lend a hand to Lucious while he’s in recovery. He also unites with Cookie to produce a song in honor of Empire Entertainment’s 20th anniversary.

GettyRumer Willis of Rise attends the Entertainment Weekly and PEOPLE Upfronts party presented by Netflix and Terra Chips at Second Floor on May 15, 2017 in New York City.

Rumer Willis, Demi Moore’s daughter, has been upped to a series regular this season. Rumer joined the cast last season for a total of four episodes.

Fans should also note that tonight’s premiere will be a cross-over event with the season 2 premiere of Star— both are Lee Daniels shows. According to the Hollywood Reporter, the plots will intertwine when Queen Latifah’s Carlotta (on ‘Star’) comes into contact with Cookie, Lucious, and Jamal.

Be sure to check out the season 4 premiere of Empire on Fox @ 8pm ET/PT. 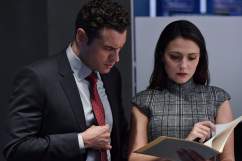