Angelina Jolie’s fourth feature film as a director, First They Killed My Father, will be released on Netflix on September 15, 2017 at 3:00 a.m. ET. Like her first film, 2011’s In The Land of Blood And Honey, the movie is not in English and features a cast of unknowns. When the film is made available, you can click right here to watch it. Here’s a preview of the film and its cast.

“They can’t stop watching it,” Ung told NPR when asked if her siblings have seen the film. “They know that Angie … and all those who made the film made it with love, and also made it to honor the lives of not only those lost, but also the lives of those who survived.”

Jolie not only wanted to make an authentic film, but also wanted to make a film for Cambodians. She used an all-Cambodian cast and crew. The film was also made in the Khmer language.

“This is their film,” Jolie told NPR. “I wanted to bring the tools and make it possible. … It would only be possible if we were allowed to be there, if the people there wanted to participate.”

First They Killed My Father also includes Jolie’s 16-year-old son Maddox as an executive producer. Maddox was born in Cambodia and also had an uncredited role in Brad Pitt’s World War Z as a zombie. “[She’s] fun, funny, and easy to work with,” Maddox told People when asked what it was like to work with her mother. “She’s a wonder.”

Sareum Srey Moch makes her debut as Ung in the film. She was discovered at an Empowering Youth in Cambodia (EYC) charity school. During production, the real Ung told The Guardian that she called Srey Moch her “Mini-Me.”

“When I met Mini-Me, we were both trying to suss each other out. We would walk around each other like roosters,” Ung told The Guardian. “Mini-Me would do something and I would look at Angie and say: I do that!” 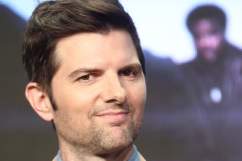