ABC "I'm Going Away" - In the wake of Wes' tragic death, Annalise returns to her family home to pick up the pieces of her shattered life, and realizes that, in order to rebuild, she must make a tough and shocking decision.

In the wake of Wes’s death, Annalise Keating and her students will grapple with strong emotions as they face the twists and turns Shonda Rhimes has written for them.

Executive producer Pete Nowalk recently spoke to EW about the premiere, revealing that tonight’s episode will pick up a month or so after last season’s finale.

At the end of last season, we learned that Laurel’s father is responsible for Wes’s death. Asked if he can answer why, Nowalk said, “That is definitely a major answer we have to give to the audience, which is why did Jorge order Wes to be killed? Esai Morales comes back. That is a major thrust of our season. That backstory is the spine of our season.”

This season will, once again, be conducted in the usual flash-forward style HTGAWM is known for… with a bit of a different touch. Nowalk tells E, “Every year, I try to do something a little different, and what’s fun about this year’s question of our season — like who’s under the sheet or who killed Sam — this year it’s a where, and it feels really different to me, but also very exciting, so it’s a where.”

During ABC’s summer press tour, Viola Davis said, “I think Wes’ death, what you see it’s kind of like a domino effect… It’s like that one block that you put on a finished piece that causes everything to fall down underneath it. That’s what you’re going to see.”

Audiences should keep in mind that Annalise and the rest of the crew don’t know Laurel’s father was the one who killed Wes.

And how is Annalise doing on the alcoholism front? Davis said, “I’m ready for the roughness to end, but you know what? She’s an alcoholic, so I guess she’s reached rock bottom and she’s trying to work her way back to being that badass Annalise in the courtroom, getting that career back, getting that life back. That’s really what you’re going to see this season.”

Be sure to tune in to the season premiere tonight 10pm ET/PT on ABC. 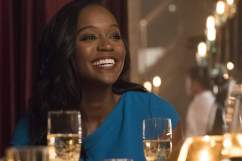 ‘How to Get Away with Murder’ Season 4 Episode 1 Live Stream: How to Watch ABC Online