Marvel’s Inhumans finally debuts tonight on ABC and if you haven’t read the comic books, you might have trouble understanding why on earth its main character, Black Bolt, can’t talk. It’s because his power as an Inhuman is a super-powerful voice. Whenever he talks, he can flatten entire cities with the sound of his voice. That means he can only communicate through sign language or his telepathic bond with Medusa.

Black Bolt, whose full name in the books is Blackagar Boltagon, is the King of Attilan, the city where the Inhumans live on the dark side of the moon. Medusa is his queen and she has the power to control her long hair. In the series, his brother Maximus, who has no powers after his Terrigen Mist exposure, stages a coup and sends Black Bolt, Medusa and the rest of his family to earth.

Anson Mount, who starred in AMC’s western Hell on Wheels, has to act without being able to speak. This is probably one reason why it was difficult to make an Inhumans movie – an A-List actor isn’t going to readily sign up for a movie in which he can’t say a word.

In an interview with CBR.com, Mount said acting without getting to speak is a real challenge. But surprisingly, he still has lines of dialogue to learn.

“First of all, I still have to memorize lines, and I still have lines – I just don’t say them with my mouth,” the actor explained. “So I have to translate my lines into a language I essentially had to invent, and I get it into the muscle memory of my body, so I can actually focus on the scene when I’m doing them and not thinking about myself the whole damn time.”

Black Bolt and Medusa find an emotional way to communicate while apart in this sneak peek from Marvel’s #Inhumans. pic.twitter.com/gqLgObiQop

Mount continued, “It’s a little bit like learning to ride a horse on a set. It’s a skill you acquire. You eventually get better at it, but at the beginning, you’ve got to rehearse it into the ground so you don’t fall.”

Of course, having a character not speak in a comic book isn’t that hard. Writers get to use narration and artists can use their skills to get Black Bolt’s thoughts across. But that’s really difficult for a visual medium like television. In the series, we’ll see Mount use sign language, but it’s not real American Sign Language. It’s something Mount, Medusa actress Serinda Swan and Marvel TV chief Jeph Loeb came up with, and it’s based on real ASL.

“I’m borrowing some of the underlying rules of ASL and what makes it work efficiently,” Mount told IGN. “It creates homework and it creates choreography and it creates getting things into the muscle memory. I have to get it so into my muscle memory because I can’t be thinking about it and acting at the same time. And to get yourself to go from here to here, it’s not easy. But it’s easier than learning Spanish; I’ll give you that.” 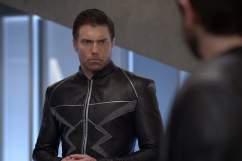