After years of development, Warner Bros. and New Line Cinema’s film adaptation of Stephen King’s It is finally in theaters. The Andres Muschietti-directed horror epic is earning good reviews and you might be wondering if you need to sit through the end credits for a scene teasing the sequel. Although there is no scene after the credits are over, there is an ominous sound heard at the end.

After the movie is over, there is laughter from Pennywise the Clown heard. During the credits, the sequel is also confirmed with the text “Chapter 1” added after the title.

It centers on a group of seven children known as “The Losers Club” who live in Derry, Maine, a fictional town that’s part of King’s universe. The children are terrorized by “It,” an ancient evil that has taken the form of Pennywise The Dancing Clown. Jaeden Lieberher (Midnight Special) stars as Bill, the leader of the Losers Club, and Bill Skarsgard, the brother of Alexander Skarsgard, stars as Pennywise.

Since King’s 1986 book It is well over 1,000 pages long, the book has been difficult for Hollywood to adapt. In 1990, Tim Curry starred in the title role for a two-episode TV miniseries. Muschietti’s adaptation is also being split into two parts, with the first film running 135 minutes.

Muschietti, who replaced Cary Fukunaga (Beasts of No Nation) as director, has said that making It: Part 2 is his priority. There was some concern that he might hold off on making it, since The Hollywood Reporter reported in July that he’s going to make a Robotech movie for Sony. But the Mama director recently told Italian site Bad Taste that he’s already planning to make It 2</i. his next movie.

"It 2 is my priority. I would [make] Robotech, in case later,” he said. He added that he’s hoping to make It 2 with a higher budget. The first movie reportedly cost around $30 million to make.

In an interview with Metro UK, Skarsgard said that the second film will look into the history of Pennywise.

“There is depth and a change in Pennywise from the first scene to the last and there’s a journey there, and I’m glad you said that and it resonated with you – that’s exactly what I want people to feel, ‘Wait a minute what is this thing?'” Skarsgard told Metro. “And I think that’s what I wanted and that’s where I want to go for the second one, to delve into the psychological and metaphysical spaces of this transdimensional being.”

As It readers know, the second half of the book takes place when the children are adults, so the next film will be significantly different.

“Yeah I think we’ll see where it goes but it’s definitely just… reading the movie and the book and talking about the second one, we have to raise the ante and not just do the same thing again so I’m looking forward to that process,” Skarsgard told Metro UK. 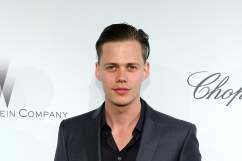 Read More
Movies, Stephen King
Now that Stephen King's 'It' is in theaters, you might be wondering if you have to stay for the credits. Find out if there is an end credits scene.