Jennifer Hudson is an Academy Award-winning superstar, who first made a name for herself as a contestant and winner on American Idol. Randy Jackson, Simon Cowell and Paula Abdul were the judges on Hudson’s season of Idol and we have a clip of her audition from the show below. Clearly, the judges were impressed with their vocals and today, she is a major recording artist, actress and a coach on The Voice. Also in recent months, she was a coach on the UK version of The Voice as well. Check out Hudson’s first ever television audition below.

Randy Jackson called Hudson brilliant and Hudson was put through in the competition on Idol.

Season 15 was the final season of American Idol, but the show is currently up for a reboot, though the show went off the air just over a year ago. Longtime host of the show, Ryan Seacrest, has agreed to return and Katy Perry has signed on as a judge. Previously, Perry appeared on the series as a guest judge alongside Simon Cowell, Randy Jackson and Kara DioGuardi.

Just a few days ago, the second judge for the Idol revival was announced as country artist Luke Bryan. So, the show is now just looking for one more judge, and Vulture reports that Charlie Puth and Keith Urban are front-runners in talks right now. Previously, Urban was a judge on Idol, alongside Jennifer Lopez and Harry Connick, Jr. Neither Lopez, nor Connick are reported to be returning to the series. TMZ also reports that Lionel Richie is a possibility for judging.

In January 2017, Hudson was a judge on The Voice UK, alongside Gavin Rossdale, will.i.am and Sir Tom Jones. And, in the end, Hudson’s contestant Mo Adeniran was the winner. 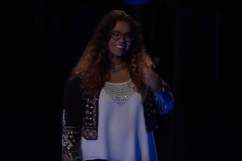