On Monday, September 4, Kensington Palace announced that the Duke and Duchess of Cambridge are expecting their third child. Middleton is set to give birth in 2018, when she is 36. She will have three children under the age of 5 when her newest family member arrives.

The new royal baby will be fifth in line to the British throne, regardless of its gender. He or she will also be the Queen’s sixth great-grandchild.

Duchess Kate is suffering from severe morning sickness (called Hyperemesis Gravidarum) and will miss a couple of her upcoming royal duties. This is nothing new for Middleton, who was very sick during her first trimesters with both George and Charlotte.

At age 35, Middleton is considered “high risk,” as the age is often said to be “advanced” for having children. Although it is common for women to get pregnant and have healthy babies at age 35 (and older), there are increased health risks to both mom and baby the older a woman gets, according to Baby Center.

“Once you conceive, and you get past the first trimester miscarriages, you face a higher risk of conceiving a baby with a chromosomal problem. This risk goes up every year. If you get pregnant at age 25, your risk of having a baby with Down syndrome, for example, is about 1 in 1,250, according to the National Institutes of Health. At age 40, the risk is 1 in 100.” 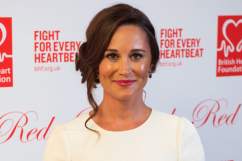