Kate Middleton and Prince William are expecting their third child, according to Kensington Palace. Middleton is having a tough time in her first trimester, currently suffering from Hyperemesis Gravidarum — or extreme morning sickness. She suffered with this condition throughout the first trimester in both of her previous pregnancies, but was feeling much better by her fourth month.

It is unknown if Middleton will be having a boy or a girl. In the past, the gender of the royal baby is something that has been kept secret until the child is born. Although the latest baby news has only been public knowledge for a few hours, many people are already wondering what the Duke and Duchess of Cambridge will name their new addition. The process of choosing a name is a bit more involved when it comes to the royal family, as the two typically select a moniker with royal heritage.

There are already rumors floating around for the new royal baby and oddsmakers have been very busy!

The most popular choices if the royal baby is a girl are Alice and Victoria, according to bookmakers Betfair. If William and Kate’s third baby is a boy, the current favorites are Arthur or Henry. Many of these names were also in the running when Kate and William announced they were expecting previously.

Prince George and Princess Charlotte were both front-runners in the royal baby name races in 2013 and in 2015. Given that information, it’s safe to say that the chances of the Duke and Duchess of Cambridge choosing one of the names below is quite high.

Below are the current baby name odds. Keep in mind, the royal baby will have a combination of three names (the full child’s name will begin with His/Her Royal Highness, Prince/Princess). 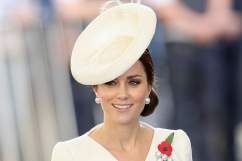 Kate Middleton’s Age: How Old Is the Duchess of Cambridge?