Kevin Hart posted an emotional video on his Instagram on Saturday, where he apologized to his wife and children after rumors of his infidelity went viral.

“I’m at a place in my life where I feel like I have a target on my back,” Hart said. “And because of that I should make smart decisions. And recently, I didn’t. You know, I’m not perfect. I’m not going to sit up here and say that I am or claim to be in any way shape or form. And I made a bad error in judgment and I put myself in a bad environment where only bad things can happen and they did.”

Sending so many apologies to my wife & kids. I gotta do better and I will. I'm not perfect and have never claimed to be …I love you all.

“And in doing that,” he added, “I know that I’m going to hurt the people closest to me, who I’ve talked to and apologized to, that would be my wife and my kids.”

Despite his ernest apology, it was Hart’s physical appearance that got the most attention. He made a facial expression where he pursed his lips, earning the description of “cheatmouth.” Watch the video below to learn more about what constitutes “cheatmouth”:

The description quickly became a hashtag, with many taking the comedian to task over his rumored cheating.”Looooool these #cheatmouth pictures are hilarious,” wrote one user. Another added that “#cheatmouth is the funniest thing I’ve seen all week.”

Check out some of the best reactions to the hashtag below:

#cheatmouth is the funniest thing I've seen all week

If you ask him a question and he hit you with the #cheatmouth just leave sis..

I'm honestly so dead at #cheatmouth

"We won't be able to accept a partial payment, you will need to make a full payment to restore services." pic.twitter.com/LsR70n5BRo

The hashtag was taken to another level when users began to compile photographic evidence of other notable celebrities who were involved in cheating scandals. Among the most notable celebrities joining Hart’s “cheatmouth” include Kobe Bryant, Tiger Woods, and Jay-Z.

The latter even addressed his infidelity to Beyoncé on his most recent album, 4:44. “If your man gives you this look, gon head and leave him, Sis. You can do better,” noted one user.

If your man gives you this look, gon head and leave him, Sis. You can do better. #CheatMouth pic.twitter.com/H7H74Bc1gi

This affliction appears to carry over into the political world. “I just googled “politician that cheated on their wives” #cheatmouth is really real,” explained one user, with an additional montage of politicians that include President Bill Clinton, John Edwards, and Anthony Weiner.

I just googled "politician that cheated on their wives" #cheatmouth is really real pic.twitter.com/GyqTgFIgGH 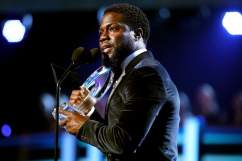