Kylie Jenner and Tyga are no longer dating, but his reaction to her pregnancy was somewhat surprising to hear. At this time, just about every news outlet has said that Jenner and Scott have been telling their friends their baby news and they are both overjoyed — meaning that Tyga is not Jenner’s baby daddy.

According to Us Weekly, Tyga took to Snapchat on Friday night, not long after the news that Jenner is pregnant with her first child broke. The rapper posted a photo of Jenner and Travis Scott’s baby news and captioned the pic, “Hell nah that’s my kid.” It didn’t take long for Tyga to delete the post, leaving many fans really confused.

The rapper split from the reality star earlier this year after dating since 2014. When asked about the split, Jenner had said that she didn’t want to be in something so serious and that she really wanted to just enjoy being 20. She and Tyga were so serious from the beginning and she just wanted to do her thing and hang out with her friends.

Not long after their split, however, Jenner started dating Travis Scott. The two ended up falling in love and things between them got really serious. In fact, some fans were wondering if Scott and Jenner would get engaged in the coming months.

But, now that Jenner is pregnant, there’s more to think about. If TMZ is right and Jenner is about four months pregnant right now, that would mean that she got pregnant after a month of dating Scott (they started seeing one another in April). That is just one month after Jenner and Tyga broke things off.

Does that mean that Jenner’s baby could be Tyga’s? Depending on the timing, it does seem like it might be possible — especially if Jenner and Tyga still saw each other after they officially split (and before she got serious with Scott).

Neither Travis Scott nor Kylie Jenner have confirmed the pregnancy. Tyga hasn’t said anything about Jenner’s baby since deleting his post from Snapchat. 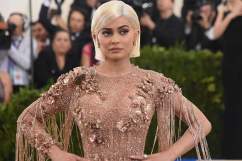