Tonight, on the season finale of Celebrity Family Feud, Lindsay Arnold and her friends from DWTS will take on the cast of Shark Tank.

For two years now, Lindsay has been married to Samuel Cusick. They may be just 23, but the couple is clearly head-over-heels in love.

Read on to learn more about Sam and Lindsay.

In a recent interview with Dance Spirit, Lindsay was asked who can always make her laugh. She responded, “My husband, Sam Cusick, always knows exactly what to do or say to make me laugh. Dancing with the Stars can be a stressful job but Sam always reminds me to enjoy myself and have fun.”

3 months ❤️❤️ time flies when you get to be married to your best friend ? @samcusick

Lindsay and Sam met when they were just 16. In an exclusive interview with People in 2015, Lindsay dished, “I could never have imagined that when I was 16 years old I would have met the man I would marry and who would be my partner – yesterday, today and tomorrow!”

The couple hired celebrity wedding planner Danielle Rothweiler to help with the nuptials, which featured arrays of golds and pinks.

Sam’s LinkedIn also states he was a VIP Rep on the Dancing With the Stars tour from June to August.

5. Sam Proposed While the Couple Was Vacationing in Africa

Just when I thought our day in Africa couldn't get any better…. We are engaged!!:):)

Sam proposed to Lindsay while the couple was vacationing in Africa. Lindsay took to social media to announce the news with a post that read, “‘Just when I thought our day in Africa couldn’t get any better…. We are engaged!!:):).”

Lindsay’s close friend, Whitney Carson, was among the first to respond to the happy news, with a post of her own that read, “My best friend in the whole entire world got engaged to the love of her life today! I am crying tears of joy, I could not be happier!! I love you guys, congrats!!! @lindsarnold @samcusick.” 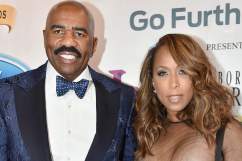